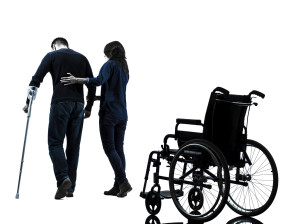 If you are left with chronic neck pain as a result of a crash injury, should your compensation be impacted at all by having suffered chronic back pain before the crash?

What’s another bit of disability if you already suffer some level of disability?  For a perfectly healthy person with no disabilities, a loss is much greater and should result in more compensation.

The insurance company argument really falls flat when you consider whether your compensation for losing an eye should be any different if you were already blind in the other one.

There is an often cited case of our Supreme Court back in 1995 when that insurance company argument was tried and failed.  The injured victim, already partially paralyzed, was injured when a car ran into the electric wheelchair she had been operating.

The insurance company lawyer had argued as follows:  “In reality, the only real change in her functional abilities arising from that accident…is that she is no longer able to walk about her apartment using a quadcane or the furniture and walls for balance. Now she must use a wheelchair or walker.”

The Judge saw the glaring error in the defense lawyer’s argument.  The Judge said:  “I think the defendant mischaracterizes and underestimates the impact of the plaintiff’s injuries caused by the 1992 accident. To use defense counsel’s phrasing, the “only real change” in the plaintiff is one of very great significance: essentially, Ms. Bracey can no longer walk, even with assistance.”

The Judge went on as follows:  “The consequences of this particular “only real change” have been and continue to be extremely difficult. Not only is there an objective and significant decrease in her physical capabilities, but the psychological and subjective impact on the plaintiff is also great and ongoing.”

The Judge concluded with the following insightful comments:  “She has, by reason of the defendant’s negligence, been substantially deprived of many of the limited pleasures and comforts life still held for her. To rob a disabled person of what little she has left is a monstrous injury, for that little she has is, for her, the whole of her life. Not only is it an enormous physical injury but the emotional damage is, to most people, well nigh incomprehensible.”

I love justice.  It has such a sweetness about it.

Are you facing a similar argument from an insurance adjuster?  E-mail me and I’ll send you a copy of this case.