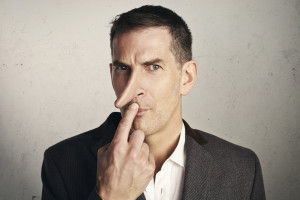 Everybody hates a liar and a cheat.

The chronic ones are very good at it.  You won’t know what hit you until it’s too late.

You try to learn from the experience.  You think about how you could have been alerted to the fact that the person you had trusted was conning or cheating you.

I had the benefit of hearing RCMP Supt. Bill McKinnon speak at a business meeting this week.  One of the topics he talked about was civilian oversight of the RCMP.  One of the challenges he raised is the fact that it takes years of experience; years of investigative interrogations to develop the skills necessary to determine when a suspect is telling the truth.  You don’t find that level of expertise in the civilian community.

Our court system does its best to root out liars.  Witnesses are sworn to tell the truth, but of course that’s not even a speed bump for chronic liars.  There is also a form of interrogation called cross-examination.  The judge watches and listens closely for clues to assist in finding the truth.

Body language is definitely a part of it.  More important, particularly for chronic liars who can mask their body language, is the consistency of the witness’s story.  It is easy to tell a lie.  It is much more difficult to be consistent about it.  A lie is exposed when it doesn’t quite fit.  It might fit in one way, or another, but the rough edges hopefully give it away.

A bold faced liar is less common.  A bold faced liar, if clever enough, can turn justice on its ear.  Judges have a lot of experience assessing credibility, but most do not have the expertise of a seasoned RCMP investigator.

Making things more problematic is the fact that there are many elements of our justice system that do not have the benefit of a lawyer driven interrogation in a courtroom.

One example is the Residential Tenancy Branch (RTB).  Rather than tie up our court system with hundreds and thousands of rental disputes, typically involving dollar amounts under $5,000.00, rental disputes are handled by the RTB.

The “trials” are extremely scaled back hearings that do not require strict adherence to courtroom evidence rules.  The “judge” is a Dispute Resolution Officer (DRO) who may or may not have much legal training.  The hearings are held by telephone where body language cannot be assessed.  There is no cross-examination.

How the heck is a DRO supposed to handle a situation where a landlord and a tenant say such completely different things that one of the must be a bold faced liar?  I have just had tickets to the show in exactly that situation.

Friends of mine, Mitch and Darla Brown, were first time landlords.  They had moved out of their home, careful to leave it immaculate, with every nail hole filled and fresh paint on the walls.  They rented the place to a young couple, Travis and Ashley Laycock, who they had described to me as the nicest folks you could ever meet.

Nice turned to nasty.  The resulting dispute ended up in front of a Dispute Resolution Officer.

One of the issues had to do with the expense of repainting one of the bedrooms.  My friends had brought a series of photographs to show the “hatchet job” the tenants had done when painting the room a hideous shade of green.

After the hearing, my friends told me about how aghast they were as they heard the lies coming out of the tenants’ mouths.  They weren’t innocent inconsistencies.  One of the lies the tenants told was that the landlords, not the tenants, had done the hatchet job, that it had already been painted that way before the tenants moved in.

My friends’ faith in the prospect of a just result was shaken.  How was the Dispute Resolution Officer to figure out that the tenants were lying to her?

Their faith was restored when they received the written decision.  Not having access to all the tools available in a supreme court trial, and not possessing the expertise of a seasoned RCMP investigator, the DRO carefully reviewed the tenants’ evidence and found the “rough edge” inconsistencies that led her to find the true facts.  I have difficulty expressing adequately how relieved I was, as a cog in the wheel of our justice system, that my friends’ faith in the system was restored.

What are the consequences of lying under oath?  Well, the tenants “lost”, and justice was done.  There ought to be more consequences, though, shouldn’t there?  Lying under oath should come with the criminal consequences provided for in the Criminal Code.  Unfortunately, there are much bigger fish to fry for our over-extended RCMP.