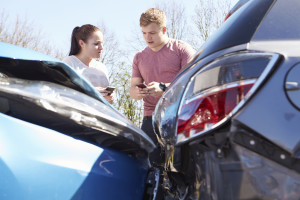 Is it our sense of consciousness that separates us from the rest of the beasts? Perhaps it’s our logical brains. Many of us think we’re mighty clever. Stick us in a stressful situation, though, and logic can go out the window.

Those with specialized training thrive: soldiers in a fire fight or an emergency room physician faced with multiple trauma patients. The rest of us? If we don’t have a plan of action figured out, our effectiveness can be non-existent and our good intentions might cause more harm than good.

At a rate, in British Columbia, of approximately one person injured in a crash every 6 minutes, a car crash is at the higher end of the likeliness scale for stressful situations we might encounter. While specialized training might be a little overkill, it might help to put your mind to how you might best respond.

There are important priorities and it is important to keep them in mind. For example, as important as it is to exchange information with the other driver, you don’t want to be grabbing a pen and paper and dashing out in front of oncoming traffic to do so.

That brings us to the top priority: safety. Whatever emergency first aid might be warranted, or your fear that the offending driver might take off, failure to consider your immediate safety and the safety of others can make a bad situation much, much worse. In short, get yourself and others out of harm’s way.

A 911 call is probably next in priority. With smart phones on every hip, a 911 call can be delegated, or even made in the throes of performing emergency first aid. Emergency services personnel know exactly what to do to help those who need help and to prevent further harm so getting them there as quickly as possible is key.

The next priority is caring for the injured. Some of us know first aid and others haven’t a clue. Those with training are likely to jump in, but it doesn’t hurt to call out for help.

The vast majority of car crashes, though, come without the need for first aid. Most injuries, even permanent, life changing ones, are not apparent at the scene, as it takes time for damaged tissues to become inflamed and painful.

You’ve survived a car crash, the scene has been secured, and there is no need for emergency first aid. What now?

I recommend that your next priority be witnesses.

However clear the issue of liability might be, I recommend getting the names and contact information of anyone at the scene who might have witnessed the car crash. It is incredible how stories can change.

Witnesses might well assume, like you, that liability is so clear that they are not required, and might be inclined to dash off to wherever they were heading. Stop them and ask that they please write their name and contact information on a piece of paper for you.

It is finally time to get the names and contact information for any other drivers and the owners of the other vehicles involved. Also get license plate numbers. Ask to see driver’s licenses so that you can be sure you are getting the straight goods. Of course, if the police have come on scene they will look after this, but police attend only a minority of car crash scenes.

Finally, and those smart phones are definitely handy for this, take a bunch of photographs. Don’t hold back. Take bunches, not just of the vehicles but also of the overall scene. Take a video snippet as well. A picture says 1,000 words, but a video says a whole lot more.

Next week, I’ll give another priority list that covers what to do after you have left the scene of a crash and includes important advice that will best protect your legal rights while ensuring you achieve the fullest and quickest recovery from your injuries as possible.