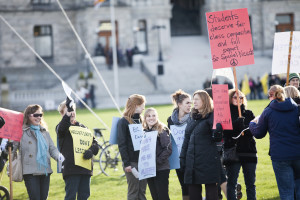 With the contract dispute between teachers and the Province of British Columbia heating up, there is talk about bringing in a mediator.

Mediation is a method of resolving disputes that has become more and more popular over the years.  Its incredible success rate has led to that popularity.

Who knows whether or not mediation can resolve the teacher contract dispute, particularly with the government position that any result must be within the “net zero” framework where any increase in teacher salaries must be offset by cost cutting elsewhere.

Within such a restrictive framework, the chances of a mediation resolving the dispute might be slim.  However slim, I say give it a shot.  I have seen, first hand, the effectiveness of mediation in cases where I have thought the prospect of a mediated solution was slim to none.

The mediation process is deceptively simple.  There is no magic.  Very simply, a mediator is brought in to assist the parties in negotiating their own settlement to a dispute.

The mediator has no decision making power.  The dispute is settled only if the parties both agree on the settlement.  This is where a mediation differs from an arbitration.

In an arbitration, the arbitrator plays the role of a judge, and each of the opposing parties work to prove to the arbitrator that their position is the correct one.

In a mediation, the mediator works with the parties to find common ground so that the parties themselves can arrive at their own solution.

With the teacher’s dispute, the parties can creatively explore cost cutting measures to achieve an increase of teacher salaries.  In my negotiations, an extra dollar of compensation for my client means another dollar coming out of the insurance company vault.

One important function of a mediation is to get the parties together to focus their attention on the task at hand.  Settlement offers can be volleyed back and forth, and lines drawn in the sand, without careful and critical consideration of the case.  That careful and critical consideration often happens for the first time as the parties are preparing for a mediation.

Another important function of a mediation is to reopen the lines of communication that may have been shut down in pre-mediation negotiations.  Pre-mediation communications are typically between me and the insurance adjuster, or the defence lawyer, and end with lines drawn in the sand.  The mediation is the first opportunity for the insurance adjuster to sit across a table from my client, and the dialogue is reopened.

The key feature of a mediation is the mediator.  An effective mediator works hard to ensure that the dialogue continues to flow, and continually rakes the sand to remove any lines that the parties may be inclined to draw.

The “kicker” with mediations is that failing to achieve a negotiated settlement means putting the decision making into the hands of a judge or a jury in a trial.  Trial results are notoriously unpredictable.  A negotiated settlement gives both parties a “bird in the hand”, as opposed to chasing the two in the bush.

It is this “kicker” that assists mediators in bridging the last gap between settlement positions that cannot be bridged through open dialogue and critical consideration of the case.  It is the risk of an uncertain trial result that can cause the insurance company to pay a little more and the injured victim to accept a little less, neither happy to do so.  I have heard many mediators say that a good settlement is one where neither party is happy with the result.

The teachers dispute has similar kickers.  The teachers face the risk of a legislated end to their job action. The government faces the court of public opinion in the next election.  I am hopeful that focusing the parties on the task at hand, opening the dialogue, the uncertainty “kickers”, and an effective mediator can put an end to the mess that has been disrupting our children’s education for the better part of a year.