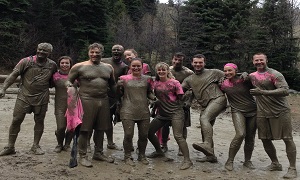 It was the bright and eager idea of a triathlete in my office to put together a team for last weekend’s muddy, gruelling, obstacle course event at Crystal Mountain.  I have a hard time saying “no” at the best of times, let alone with my pride on the line.  I signed my 43 year old, horribly deconditioned, 30 pounds overweight self to join in.  The crew, of course, chose the 12 kilometre instead of the 6 kilometre option.

I started my “training” about a month before the event, by doing the 15 minute walk to work instead of driving, and working my way through the first season of “Prison Break” on the small television mounted above a treadmill.  It didn’t take long for my left Achilles tendon to act up for lack of stretching and going from zero to 60 (or more like zero to 30) in too short a time.  My training ended as abruptly as it started.

I felt like getting back at it about a week before the event but the triathlete, Jake, argued against it.  “Stay in bed” was his advice, concerned “the old man” would have another injury that would eliminate my participation in the event.  He had similar advice the morning of the event, advising me not to stretch because a non-stretcher like myself might pull something.

My lungs worked overtime the first section of the course, seemingly unable to take in enough air, but things settled down when one of our team members, an import from outside the office even older than me, had to hold back because of a work related foot injury.  I, of course, held back with him in support and kept him hydrated with my Camelbak.

I ended up with a bit of a “shiner” from bending down when a knee was coming up, and had this or that other bruise or abrasion but I was none the worse for wear the rest of the day and into the evening as we celebrated our team effort.  Us deconditioned types knew that the muscle pain “payback” would kick in the next morning and last for several days.

The crawling through the mud under barbed wire, rope and net climbing, sand-bag carrying, tire dragging and other events must have been calculated to strain absolutely every muscle group because my entire body felt like I had been hit by a truck the next morning as the slightly torn muscle microfibers became inflamed and started their healing.

It was a “good pain”, though.  As hard as it was to drag myself out of bed, the pain that came with every movement meant I had done something with this body of mine that spends way too much time on its behind at a computer.  It was almost a badge of honour to complain about how sore I was.  No big deal, anyway: sore muscles completely resolve within a handful of days.

My comparison to being hit by a truck doesn’t come from personal experience.  I’ve never, actually, been hit by a truck nor other vehicle though I have acted for many who have.  Anyone familiar with car crash injuries knows that it takes until the next day or so before the microfiber tears from most car crash injuries become inflamed and painful, just like with the microfiber tears from muscle overuse.

The difference is that our bodies are designed to repair and rebuild after overusing our muscles, leaving us stronger.  That’s the whole point of muscle building training.  In contrast, the destruction to tendons, ligaments and muscle tissues caused in car crashes often goes beyond the threshold of what our bodies can recover from, leaving us permanently weakened and with pain that never goes away.

When car crash victims are assessed at the scene of a crash, they feel just as fine as I did after completing the muddy obstacle course, though without the shiner, bruises and abrasions because seatbelts are really good at preventing impact injuries.  They don’t have any detectable injury, and regularly refuse a trip to the hospital.

The pain kicks in the next morning.  Sometimes the tissue damage is within the threshold level that the body can heal from and the pain is short lived.  Sometimes it reaches just beyond, resulting in a lifetime of weakened and painful tissues.

On learning how these “soft tissue injuries” work, would it be responsible for a news reporter to ever report that there were “no injuries” or “minor injuries” in a crash without first checking in on the victims the day, week, month, or year after a crash?  BC Ambulance Service Representatives are directed by their Media Relations Policy not to do so.

Our driving culture will not change if we are continually  bombarded with media reports of crashes, irresponsibly reporting “no injuries” or “minor injuries”, leading us to believe that crashes don’t come with serious consequences.  How else could an injury potentially resulting in a lifetime of weakened and painful tissues be described except as “serious” or “potentially serious”?

Published May 15, 2014 in the Kelowna Capital News