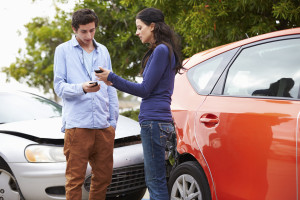 There are a surprising number of inattentive drivers who blow through red lights and plough into backed up traffic.

In such cases, there is no dispute about which driver was at fault in a crash.

In many cases, however, things are not so clear. You may have thought they were but they are not.

You lived through the crash and know with certainty that there was nothing you could have done to avoid it. The other driver may have been ticketed for failing to yield the right of way. The insurance company may have even agreed with you at the beginning and made a finding that the other driver was 100 per cent at fault.

The problem is, things get foggy as time passes. Memories fade. Our brains then play tricks on us, subconsciously filling in the faded gaps. Even you might begin to second guess yourself.

Was the traffic light amber or had it already turned red? How far were you away from the intersection when you first realized there was a problem? How much time did you have to react? How fast were you going?

You know you were in the right, but how do you prove it three or four years after the fact when the details are gone?

How does the court choose between your version of events and that of the other driver? The investigating police officer concluded that the other driver was at fault. Can’t you just get him or her to tell that to the court? Unfortunately, you cannot. His or her opinion of fault will not be admissible.

Keep that in mind if an insurance company ever makes an unfair assessment of fault against you, you can always get a fair ruling from the court.

It might come down to your word against the other driver. Two human brains duking it out about what happened three to four years ago.

How likely is it for justice to be done? You, however, can help avoid injustice.

First, preserve the evidence. Make sure that the circumstances of the crash can be presented to the court three to four years later, just as clearly as you lived through them.

A little detective work can go a long way. There are several things you can do at the scene, provided you are physically capable of doing so.

If you are not able to, hopefully, you have the presence of mind to ask a friend or family member.

• Talk to the other driver. What does he or she have to say about what happened? Whatever he or she tells you, write it down immediately.

• Is there a camera available? You may not have one with you, but many people have cell phones with digital cameras built in. Don’t be shy. Ask for help. Take pictures of everything. You never know what detail may be important.

• Get the names and telephone numbers of anyone who might have witnessed the crash. Again, don’t be shy. Getting this information could mean the difference between justice and injustice.

You cannot rely on the police to do this for you. Many crashes are not attended by the police. Even if an officer does attend, his or her focus is on law enforcement, not preparing a case for a liability trial.

• Preserve the recollections of the witnesses. Interview them. Write down what they tell you. Get them to sign it. Do as soon as possible after the crash when memories are fresh.

• Write out your own statement of what happened. Put as much detail as you can into that statement.

These extra efforts may be unnecessary. But my advice is not to take any chances. Guard against some clever insurance defence lawyer being able to turn things against you. Arm yourself with the evidence that will speak for itself, evidence that is well preserved so it will not fade.