Is there parental accountability if a child darts out on the street and is injured? 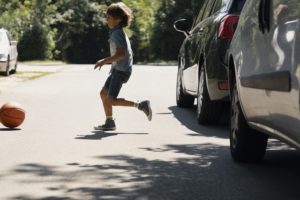 The context is the court decision of Bourne (Guardian ad litem of) v. Anderson,  1997 CarswellBC 667.  I referred to that decision last week when cautioning drivers to slow down and keep a sharp lookout anywhere children might be trick-or-treating.

The motorist in that case was driving on a residential street.  Two boys were hiding from and sneaking up on a sister.  One of the boys had just darted across the street in front of the motorist, leaving the other one crouched, out of view of the motorist.

The court made a common sense finding: Once a driver becomes aware of the presence of children on a residential street, the driver must take special precautions for the safety of other children who might come onto the street as well.

Special precautions would include immediately reducing speed and keeping a sharp lookout.

Had those special precautions been taken, the motorist would have been able to avoid hitting the next child who darted out after the first.  She was therefore found liable for the injuries to the child.

Her clever insurance company, though, sought to pass the blame on to the injured child’s parents.  They said the child’s parents should have done a better job of instructing and training their son about street safety.

In legal terms, they were saying that they breached their “parental duty of care”, a duty that us parents owe to our children as well as to others who might be harmed by our children.

We are not held to the unreasonable standard of creating perfectly obedient little soldiers.  Nor are we required to keep our children on leashes to eliminate any chance that they might hurt themselves or others.

But we are, indeed, held to a reasonable standard of care when it comes to supervising and controlling the activities of our children.

The parents testified that they had instructed their children to cross the street only at the corner, to look both ways and never to go between parked cars.

The mother believed that her son, aged seven years and four months at the time of the collision, understood the rules, which she never saw him disobey.  The father had specifically explained to his son the danger of going onto the street from between parked cars and of playing around parked cars, because the drivers of approaching vehicles would not be able to see him.  It seemed to the father that his son understood.

The judge concluded that there was no evidence of negligence on the part of either parent in instructing and training their son about street safety and the claims against the parents were dismissed.

But there was another way the defending insurance company tried to avoid the accountability of the negligent motorist.  They also pointed their finger at the injured child.

His parents had taught him about street safety.  He was told to cross at the intersection, but instead crossed between parked cars.  He also failed to follow the rule about looking before crossing the street.  He clearly failed to look out for his own safety and the defending insurance company sought to reduce his entitlement to compensation on the basis of a legal concept of “contributory negligence”.

I will address that issue, of when children will be held accountable for looking after their own safety, in my next column.