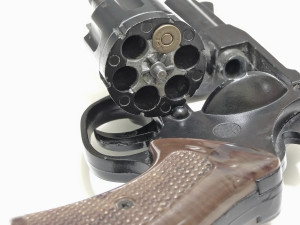 We’re all familiar with Russian Roulette, right?  No insult intended to the Russians among us.  I just don’t know it by any other name.

You stick a bullet in one of six revolver chambers, give the chambers a spin, and put the gun to your head.  You hope like heck you don’t get the unlucky chamber as you pull the trigger.

Okay, there’s luck and then there’s just plain stupidity. But perhaps it’s not so stupid if the stakes are high enough.

Would you do it in a gamble over a $1 million with nasty loan sharks on your heals? The five chances out of six that the revolver offers may be better odds than the loan sharks offer. How about if we improve the odds? Imagine a revolver with one hundred chambers. How about a thousand? Would a million be enough?

Even if there was only a one-in-a-million chance that a bullet would be in the chamber, is there any way you would pull the trigger? Put the gun to someone else’s head, does that change your answer? How about to a child’s head?

I know, I better be going somewhere with this. I happen to be on holiday. My wife and I and our three children, aged six, three and 20 months, are staying with my father and his wife, Ida, in Brazil, where they are retired.  There is a beautiful waterfall approximately 50 kilometres from their home. They have a small car that seats five.

Brazil is behind Canada in promoting seat belts, let alone proper child safety seats. In this area of Brazil, it is not uncommon for a small child to ride on the lap of an adult passenger if they are going for only a short drive.

My step-sister does that, even though she has a child safety seat in the back seat of her car. She’ll put my niece in the safety seat for a long drive but what’s the harm in having the little tyke on her lap on a short trip to the store?

That was the suggestion Ida had made—just hold two of the kids on our laps as we drove to and from the waterfall. The alternative was not attractive. A trip had to be made into the nearest town with car rental facilities and $100 dropped for a one-day rental.

It isn’t cheap to rent a car in these parts. But the money is secondary. That’s an extra 1 ½ hours when you work in picking up the car and dropping it off. All that for a little day trip?

It seemed to Ida that I was being unreasonable, considering that such extra effort and expense had to be incurred.

I haven’t been in a car crash in the 37 years I’ve been on this earth. What are the odds that we would be in a crash today?

The local police don’t care. In fact, a local policeman stopped by while the issue was being discussed. He is a friend of the family. He offered his professional opinion that there was nothing wrong with having the kids in our laps on the short day-trip. He said that he’s never personally heard of a child being in a car crash in these parts.

No, I didn’t make that up. I didn’t realize it at the time, but there I was: Rolling the chambers of that imaginary revolver around in my mind. It was a double-barreled one, one barrel pointed at Morgan and the other at Caden, the young ones who would be seated on our laps.

They would fly through the windshield in a crash. I’ll ask for my kids’ forgiveness for this when they’re old enough/to understand. I was actually starting to succumb to the pressure to not be so “unreasonable.”

Thankfully, as often happens, the voice of reason in my family put her foot down.  Yes, my wife. So away we went to rent that car.

As it happened, we were not in a crash. The extra time and money spent to ensure the kids were properly belted in might be seen to have been wasted.

But I don’t think so.