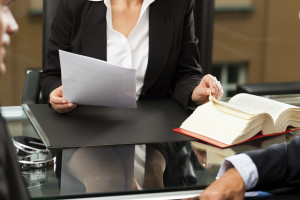 In my September 15, 2011, column, “Only winners are the lawyers in insurance claim lawsuits”, I promised to answer the question of why contingency fees charged by personal injury lawyers are so high.

Percentages range, but one-third is typical.

On the face of it, that sounds insane.

As a comparison, you certainly wouldn’t pay a real estate agent a one-third sales commission on the sale of your house.

With a house, though, you can pay $500.00 for an appraisal and know the value up front.  Reasonably priced, and listed according to standard marketing protocols, your house is going to sell close to appraised value.

Also, the amount of work the real estate agent is going to put into selling your house is reasonably predictable.

The only “appraisal” of injury is a doctor’s prognosis.  In the early stages a medical prognosis is about as reliable as a weather forecast.

Even if there was a crystal ball that could accurately predict the course of your recovery and whether or not that recovery will be a full one, the real question is how your injuries will impact on your life.

Two people suffering exactly the same injury, with exactly the same pattern of recovery, will likely have very different harms and losses.  One, working in a desk job, might not require any time off work.  Another, a massage therapist, might never be able to return to full time work.

It is typically past the two year deadline for commencing a lawsuit to enforce your claim when your harms and losses into the future can be reliably predicted.

By the way, before you start hoping that the three cherries come up on the slot machine for you, consider that the $800K was compensation for a fellow with such serious, unrelenting pain that he is unlikely to ever work again.

In addition to a completely unpredictable claim size, there is no way to predict how much work the lawyer will have to do to achieve fair compensation.

The amount of time spent working on a case is not related to the size of the claim.  Some of my hardest fought battles are over relatively small claims.

When I first started handling personal injury cases, approximately 15 years ago, I always offered potential clients a choice of paying me by the hour for the time I spent instead of paying me a percentage fee.  I stopped offering the choice because I found I was wasting my breath; no-one was interested in the hourly rate option.

That is what you are paying for when you agree up front to pay one-third of your claim to a lawyer.  You are paying to eliminate that risk.

You are also eliminating the risk that, where liability is not crystal clear, your case is dismissed and there is no compensation paid at all for your harms and losses.  In that circumstance, the lawyer is paid no fees at all.

Of course, if you could rely on the insurance company to pony up fair compensation for your harms and losses without having to hire a lawyer, I would be out of a job.  In fact, fair compensation achieved with the assistance of a lawyer is typically several times what an insurance adjuster will offer an unrepresented injury victim.