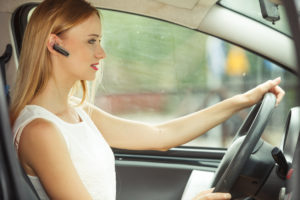 “I was punished basically for not having enough money to buy a Bluetooth device.”

She had been talking to her mother, on speaker phone, while sitting at a red light. The phone somehow went off speaker, and she needed to handle it to turn the speaker back on. An RCMP officer in a “ghost car” ticketed her.

If she had the money for, and chose to purchase, hands free technology, it would have been perfectly legal for her to chat away on the telephone her entire journey.

She could have been yak, yak, yakking away, notably oblivious to what was going around her, glanced over and given the RCMP officer a wink without a worry in the world.

Don’t have the money to afford hands free technology? Sucks to be you. You’ll just have to pull over, or wait until you arrive at your destination, before you can have your telephone discussion.

That’s how it was in the “good old days”? On the rare occasion that something really pressing came up, eyes scanned the strip malls for a phone booth. We dug for the quarter to operate the thing. Just a quick call to get back on the road as quickly as possible.

If affluent enough to afford hands free technology, you now have the privilege of chatting away on a telephone the entire way!

Life isn’t fair. Affluence comes with all sorts of privileges. This is just another one.

Would it surprise you that a discussion paper “Addressing the Problem of Distracted Driving and its Impacts to Road Safety,” includes the following words in the Executive Summary: “Evidence also concludes that there is no difference between the cognitive diversion associated with hands-free and hand-held cell phone use?”

Would you be angry if you knew the discussion paper had been available to the Province of British Columbia before enacting legislation that prohibits hand held, but not hands free, cell phone use?

Would it push you over the edge if you knew that the discussion paper was issued by British Columbia’s very own Ministry of Public Safety and Solicitor General?

Dr. Louis Francescutti, professor in the School of Public Health, University of Alberta, was interviewed by CBC in August, 2016. Wasn’t that around the time when ICBC was announcing the “worst case scenario” of a 40-some percent increase of rates?

A write-up of that interview summarizes:

“Francescutti said governments are to blame for allowing what he calls ‘idiotic legislation’ that told people it’s OK to use hands-free options while driving.”

By making only hand-held cell phone use illegal, the government impliedly gave two enthusiastic “thumbs up” to the hands free version, which the government very keenly knew was just as dangerous.

After January 1, 2010, reassured about the safety of hands free cell phone use, they put immense profits into the pockets of those producing hands free technology and enjoyed the privilege of using their vehicles like a rolling phone booth.

Instead of causing a reduction, the British Columbia government has actually caused an increase in cell phone use while driving.

With that increase has come increased crashes. Crashes cause vehicle damage, injuries and deaths. Leaving personal loss alone, those crash impacts cost billions of dollars of cost to British Columbians.

No wonder ICBC rates have been increasing! What about increases in emergency services, health care and other costs that impact our taxes?

Dr. Louis Francescutti suggests that we should bring a class action against our own government for knowingly making the problem of distracted driving worse instead of better.

It took class action litigation to force tobacco companies to be held accountable. Will it take a class action lawsuit to force our political leaders to do take the very, very simple step of banning cell phone use while driving altogether?

With an election just around the corner, we could not be better situated to put pressure on our political leaders to do the right thing. Which party will commit to changing the legislation if they are elected?

If the “right thing” doesn’t happen, I put up my hand as willing to lead a class action lawsuit.

ICBC Statistics need to back up political platforms – Hergott Law