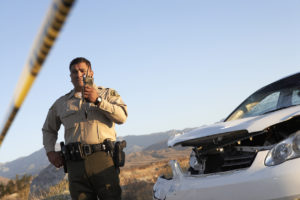 It’s got to be maddening.

“At crash scene after crash scene, we have seen the tragic results of something that is completely preventable. Drivers have to leave their phones alone.”

Have you seen the Myth Buster episode concluding that driving while talking on a cell phone is as dangerous as driving drunk? Click HERE for the link.

The public, though, don’t seem to get it. From Cst. Holmes’ perspective, cell phone use while driving is just as prevalent as it was before the law changed in 2010.

In my last column I explained why that “idiotic” law, prohibiting only the hand held version of this distracting behaviour, has made things worse instead of better.

I quoted from a discussion paper published by British Columbia’s Ministry of Public Safety and Solicitor General noting: “Evidence also concludes that there is no difference between the cognitive diversion associated with hands-free and hand-held cell phone use.”

We see drivers talking away on their cell phones all the time, as do the RCMP.

It must be maddening not to be able to do anything unless that distracting behaviour is accompanied by a reach for the cell phone.

They must be as irritated as those they are ticketing, the palpable unfairness of “everyone else” chatting away with impunity while those few get hefty fines.

When asked about the impact of increased fines, Cst. Holmes says that drivers have gotten more creative with hiding their phones while driving.

And that adds to the danger.

The higher the fines and the more resources we put into policing the idiotic law, the more careful drivers will be. Not careful about driving: careful about concealing their cell phones.

That, or spending money on hands free technology.

Neither of which will do anything to discourage chatting on the phone while driving.

Cell phone use while driving is the new “impaired driving.” Targeting the hand held version is like saying it’s ok to drink vodka and drive, but not beer.

Will you take a personal stand and refuse to talk on the phone with anyone who is driving a motor vehicle, even if they say “It’s ok, I’m hands free?”

Will you sign a petition for a change in the law?