This is the final of a four part series about the legal duties of motorists and cyclists in common collision scenarios. 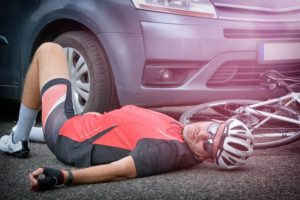 Increased awareness of common collisions, and how they can be avoided by meeting your legal driving and riding duties, will hopefully make our roads safer.

Imagine yourself as a motorist waiting to turn left in congested traffic. Others are lined up behind you to make the same turn. The two lanes of oncoming traffic stop leaving a gap for you to make your turn.

Do you proceed as quickly as possible to maximize the opportunity of those behind you to also make it through?

Now imagine yourself as a cyclist riding along two lanes of stop and go congested traffic.

Do you continuously maintain your cruising speed of 25-30 kms/hour?

Line of sight between left turning motorist and oncoming cyclist is blocked by the two lanes of stopped traffic.

The collision, causing serious injuries to the cyclist, occurs when the motorist proceeds through the gap in traffic just as the cyclist reaches the same gap.

In MacLaren v. Kucharek, 2008 BCSC 673, the judge assessed: “The defendant negligently failed to ensure he could complete his left hand turn without first ensuring before doing so that there was no traffic approaching so closely as to constitute an immediate hazard, thus breaching s. 174 of the Act.”

The judge’s words in Kimber v. Wong, 2012 BCSC 783: “I find that in heavy traffic and where her view of the eastbound lane was limited, Ms. Wong was negligent in failing to inch forward until she could see whether there was an obstacle to her safely completing her left-hand turn.”

And in Ilett v. Buckley, 2017 BCCA 257: “She was held to be at fault for the collision because, as she made her left turn, she drove across the northbound lane at speed when she was unable to see whether the shoulder was clear of cyclists. She was required to drive more slowly until she could see beyond the large vehicle and ascertain what she needed to know.”

This is a more common collision scenario between vehicles, with stop and go congested traffic leaving a gap for a left turner who collides with an oncoming vehicle cruising along a less congested lane (often the HOV lane).

These collisions would be virtually eliminated if the left turner always proceeded cautiously, inching along as might be necessary to eliminate the possibility of colliding with an oncoming motorist or cyclist.

But fault for these collisions is typically shared. A cyclist cruising along the shoulder, or even a bicycle lane, should anticipate the possibility of a left turning vehicle if traffic stops, leaving a gap.

The judge in the MacLaren decision (above) had found the left turning motorist 100% at fault. That decision was appealed, the result being a sharing of responsibility with the cyclist. Our Court of Appeal in MacLaren v. Kucharek, 2010 BCCA 206, determined that the cyclist ought to have merged into the stop and go through lane when proceeding into the intersection, rather than riding alongside and passing those vehicles.

Most recently the Court of Appeal in the Ilett case (above) explained: “Mr. Ilett rode into the intersection at speed when he was unable to see whether it was clear for him to do so because the large vehicle blocked his vision in the same way as it blocked Ms. Buckley’s vision. He was required to slow down or if necessary stop until he could see whether the intersection was clear. His failure to take what would have been reasonable care caused or contributed to the collision and the injuries he suffered.”

With heightened awareness and care, we can work together to anticipate and eliminate collisions.