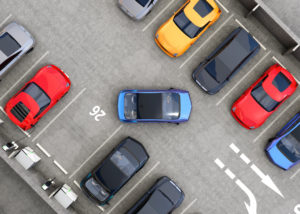 ‘Tis the season….to be in a parking lot.

It’s a cruel kind of torture, driving up and down isle after isle to find a spot.

Everyone else seems to have the uncanny sense of anticipating when a vehicle is about to leave.  They rush over and plant themselves to “cherry pick” the spot.

Then there are those with the unfair “foot soldier” advantage, the co-shopper who runs over to a spot and stands there while the driving co-shopper makes it around the isle.

I would love for there to be established rules of etiquette, giving everyone an equal chance at finding a spot.  Anyone interested in coming up with a “rule book” for public scrutiny?

It’s not a free for all under the law.  In fact, the rights of way in a parking lot are the same as on any other “highway”.

The grand-daddy of rules of the road, the Motor Vehicle Act [RSBC 1996] Chapter 318, provides those rules with reference to “highways”.

Section 1 of that act defines the word “highway” to include: “every road, street, lane or right of way designed or intended for or used by the general public for the passage of vehicles”.

I’m not being terribly helpful to most drivers, because it seems that most are horribly unaware about the rules of the road.

There’s the added complication, recognized at paragraph 41 of De Abreu v. Huang, 2013 BCSC 398, that “…the rules of the road historically established by the Motor Vehicle Act R.S.B.C. 1979, c. 288 and by the common law may not always translate to parking lots, which may have configurations different from public highways.”

I’ll give you one clear example of the application of standard rules of the road to parking lots, though.  Laneway intersections in parking lots seldom have stop, yield or other signs indicating who has the right of way.

We all know that at an uncontrolled intersection you “yield to the right”.

What about where there’s a much wider thoroughfare through a parking lot, complete with a yellow line down the centre?  Does a vehicle coming out of one of the many laneways to your right have the right of way?

I suspect that most uninformed people would assume, like the plaintiff in Blake v. Gill, [1996] B.C.W.L.D. 2590, that they have the right of way travelling down that yellow-lined thoroughfare.

Ms. Blake was confident in her assumption.  Rather than yield to the driver heading up the laneway from her right, she pressed on and honked her horn.

The court helped Ms. Blake understand the rules of the road, finding her negligent for failing to yield right of way.  The other driver was also found to share liability, though, for failing to notice Ms. Blake’s vehicle approaching the intersection.  That’s right, even if you have the technical “right of way” you have an obligation to keep a lookout and avoid collisions if you can.

The judge’s conclusion on this point: “There is a difference between the negligence of Ms. Blake and that of Mr. Gill. That Mr. Gill was legally in the right should be given some weight. Mr. Gill’s negligence was that of inadvertence: he failed to see what he should have seen. Ms. Blake’s negligence was conscious: she saw the risk and did not take precautions. In these circumstances, I attribute 60% of the fault to Ms. Blake and 40% to Mr. Gill.”

A good rule of thumb in parking lots?  Assume nobody knows the rules of the road and always ensure that every movement you make can be made safely.