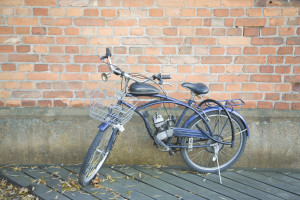 “Perhaps the regulations would benefit from a review.”

I couldn’t agree more with Mr. Justice Brown who made that comment in his decision dismissing the appeals of Mr. Raymond Rei.  Mr. Rei had been ticketed for operating a vehicle without insurance and without a driver’s license.  He disputed the tickets and argued his case at the Provincial Court level.  He lost.  He appealed to the Supreme Court of British Columbia where he came before Mr. Justice Brown.

The subject matter of the appeal was whether or not the two wheeled “device” Mr. Rei had been riding required insurance or required the driver/rider to have a driver’s license.

According to the laws of the Province of British Columbia, a “motor assisted cycle” is treated like a bicycle.  You can ride it without a driver’s license and without insurance.

Consider the debate about what kind of two wheeled critter ought to require a driver’s license and insurance and what ought not to.

I expect most of us would agree that a bicycle should not.

What about a bicycle that you add a small electric or gasoline engine to, to assist in getting up some of our Okanagan hills?

If we’re going to allow bicycles with engine add-ons, what about scooters that are manufactured with both pedals and small electric or gasoline motors?  They go no faster than a strong cyclist could pedal, in fact in many cases they can’t go as fast.  They are far more environmentally friendly than a car and you get as much exercise as you choose with the pedals.

A line has to be drawn somewhere.  It is the definition of that line that Mr. Justice Brown was referring to when he said “Perhaps the regulations would benefit from a review”.

A “motor assisted cycle” is a defined term in the Motor Vehicle Act.  In order to fit within the definition, the two-wheeled beast must be one “to which pedals or hand cranks are attached that will allow for the cycle to be propelled by human power”.

Incidentally, if you were to actually read the definition of “motor assisted cycle” in the Motor Vehicle Act, you would not see anything alerting you that the definition is incomplete, i.e. that you have to look somewhere else for the rest of the rules.

Even ICBC, the government agency responsible for this stuff, has difficulty explaining it.  They have a table on their web site with a list of requirements to qualify as a motor assisted cycle.  The list doesn’t include the engine shut-off requirement.  To be safe, they have a link to the Regulations so you can read them yourself, but the link currently goes nowhere.  I hopefully expect that the link will be repaired as soon as this column is published as I have been told that my column is required reading for some unfortunate folks at ICBC.

Mr. Rei’s “device” was in the greyest of the grey areas.  His “device” did have pedals, but they were removable.  He could clip them on and off as he wished.  He found that the pedals made his device unsafe because they hit the pavement when the “device” naturally leaned over while rounding a corner.  For safety’s sake, he removed the pedals.

It is not apparent from the court decision whether, had the pedals been clipped on, some sort of engine shut-off mechanism might have been engaged.  On the basis of the pedals alone, he was properly riding without a license and without insurance if the pedals were clicked on, but his “device” became illegal when he took the supposed safety measure of unclicking the pedals.

Mr. Rei had to pay a couple tickets.  No big deal.  Insurance implications can make it a big deal, though.  I am directly aware of a fellow who had been riding a similar “device” and was run off the road by a negligent driver.  For the same safety reason, he had removed the pedals.  He hasn’t been able to work since the crash and ICBC is denying him the significant benefits he would have been entitled to had he not unclipped the pedals.

Is the “device” that you or someone you care about is riding “legal” without a driver’s license and insurance?  Would you be denied benefits if a motorist ran you off the road?  With incomprehensible rules that even ICBC can’t get right, how could you even find out?