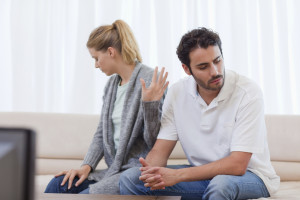 Your neck seizes up something terrible and you end up with a pounding headache that just won’t quit. You know from having read my newspaper column that you should seek legal advice to ensure you are not taken advantage of by the insurance company.

You and your husband have been paying for vehicle insurance for years. You expect that the insurance company will have no problem providing you with fair compensation for your injuries.

You obviously have not read enough of my columns.

The lawyer advises you that your insurance is meaningless. Rather, it is your husband’s insurance that matters, because he is the one who caused your injuries. You are told that in order to achieve fair compensation, you will need to pursue a claim against your husband.

If the insurance company doesn’t treat you fairly, you will have to actually sue your husband to force them to. What? How is that for putting a chill on chit-chat around the dinner table. What about your relationship with your mother-in-law, who is likely to treat you with even more contempt with a lawsuit hanging over her son’s head.

What has the lawyer been smoking? But it’s true. And, if you think about it, it makes a whole lot of sense. In our society, those who are careless and cause injury have a legal responsibility to compensate the victims for their losses. It doesn’t matter if there is a family relationship involved, the responsibility is there.

Apart from insurance, it wouldn’t make sense for a wife to sue her husband because his carelessness caused her injury, though, because his assets are typically her assets and vice versa.

But with insurance, it makes lots of sense.

The only way to force the insurance company to pay fair compensation is to do so by way of a lawsuit, which may result in a trial. Once again, that’s the case regardless of whether or not there is a family connection between the negligent driver and the injured victim.

Your husband will not be bothered by it at all. If a lawsuit is required, he will simply hand over the legal paperwork to the insurance company who will look after everything. I know from the fact that I am continually giving advice about this stuff that the reality of how automobile insurance works is not common knowledge.

I wonder how many legitimate injury claims are not made because of ignorance.

I also wonder how many millions of dollars insurance companies save on an annual basis because of that ignorance.