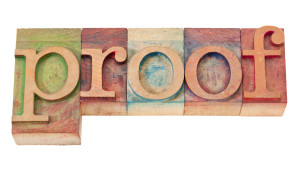 The court requires criminal charges to be proven beyond a reasonable doubt.  In other words, if the judge or the jury hearing the case has any reasonably held doubt about whether or not you committed a crime, they must acquit.  This helps prevent the horrible injustice of wrongful convictions.

In a non-criminal case, there is a very different “standard of proof”.  An innocent victim is not required to prove anything beyond a reasonable doubt.  Instead, if you imagine the iconic scales of justice, the innocent victim must tip the scales ever so slightly in his or her favour.

I am not a historian, but perhaps the difference has to do with the notion that the risk of undercompensating an innocent victim is equally as unjust as the risk of providing more than fair compensation.

In the context of going up against a powerful insurance company to force fair compensation out of them in court, I would venture to say that the risk of less than fair compensation is in fact the more significant one.

In a civil claim, the court must typically consider what is “more likely than not”.  The common defence tactic is to do whatever they can to cloud the issues and raise doubt which is enough to avoid a criminal conviction but is not enough to avoid fairly compensating a civil claimant.

There is one aspect of a civil claim that requires even less than a “more likely than not” level of proof, and there’s good reason for it.  This aspect has to do with gazing into the crystal ball to try to predict future events.

A trial often occurs 4-5 years after the crash that caused your injuries.  It is far easier for the court to it is to gaze into the crystal ball to figure out what you might lose in the future.

You may have been able to soldier on and work through your pain with very little, if any, income lost up until the date of the trial; but are you going to be able to continue doing so for the rest of your working life?

Is it fair to say that “the past is an indicator of the future” in the context of working through a chronic pain condition?  How could you possibly “prove” future losses?

When considering a future loss, the court applies a different test.  The test for future losses is whether or not there is a “real and substantial possibility” that the loss will occur.

This test was applied last year by the highest court in British Columbia in a case called Morlan v. Barrett.  The British Columbia Court of Appeal was dealing with the defence appeal of a trial decision.

Ms. Morlan, age 50 at the time of the trial, had been suffering chronic pain during the approximately four years between the crash and the trial, but had been able to work through her pain and adjust her employment situation to avoid losing any income at all during that period of time.

In awarding a substantial amount of compensation for future income loss, the trial judge relied in part on what he described as a “common experience” that a person with a stable but persistent energy-draining condition will find it more difficult to continue working as he or she grows older.  The defence, on appeal, argued that there was no evidence to support this notion.

The Court of Appeal disagreed with the defence, noting “…throughout each and every day of her life, Ms. Morlan would have to cope with some level of discomfort.  In my view, it was open for the trial judge to find – essentially as a matter of common sense – that constant and continuous pain takes its toll and that, over time, such pain will have a detrimental effect on a person’s ability to work, regardless of what accommodations an employer is prepared to make.”

How’s that for a victory of justice?  Hard working, honest people who are able to soldier on through their pain in the short term really can be fairly compensated for their potential future losses because “prove it”, when considering those potential losses, is a standard that can be met essentially as a matter of common sense.