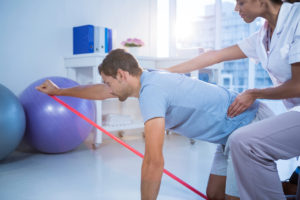 There are various levels of function. On one end of the spectrum, there is simply looking after your own personal care. Some people who have been injured in car accidents lose even that level of function. That is a scary thing.

I vividly remember the evening after my first day of snowboarding when I was so seized up that my wife had to fork my dinner into my mouth for me. It is regrettable that it is only by losing function that some of us can truly appreciate the function that we have.

The strongest push for a return to function after a car crash is for a return to work. It is no surprise that an insurance company would push for that. It will have to pay your income loss at the end of your claim, and getting you back to work will keep that loss to a minimum. The reality of having to make the mortgage payment is often enough to force people to work even before they are medically ready to do so. On a positive side, returning to work can also be very important for recovery.

With many car crash in-juries, the worst thing you can do is sit on the couch and do nothing. The structured routine of a job can help with forcing you out of bed in the morning, notwithstanding stiffness and pain. Even if the job is not physically demanding, it keeps the body moving.

Where one end of the spectrum of function might be the ability to feed yourself, and returning to work might be somewhere in the middle, the other end of the spectrum might be a return to the activities, hobbies, and social outings that many of us see as the true pleasures in life.

For crash victims suffering from chronic symptoms, it can take all their available energy just to pull themselves out of bed for that job that makes the mortgage payments. At the end of a shift, they are often too tired to do much else. Whether or not they would be physically capable of it, the energy just isn’t there. If the energy hurdle is passed, there is the issue of whether or not the activity should be attempted.

When turning your head quickly results in a shooting pain down your arm, does it make sense to attempt a return to bowling or dancing or downhill skiing? Also, how wise is it to attempt an activity when an insurance company surveillance team may be standing by to catch it all on video?

Often, actually doing the activity doesn’t bring on the most pain; it is the day or two of muscle spasms that follow. Video footage of you trying something paints an unfair picture when it does not include the video footage of the painful aftermath.

First, get your doctor’s advice and follow it. If your doctor says that you can try a return to downhill skiing, then try it. If you use your own judgment as to whether or not to return to an activity that you used to love, you run the risk of not being fairly compensated for that reduction in your enjoyment of life. If you get your doctor’s approval to attempt a return to an activity, give it your best shot. Don’t let an insurance company surveillance team get in the way of living your life as fully as possible.

I have every confidence that our court system will root out unfair tactics and will allow justice to prevail. Finally, don’t mask the fallout. I noted last week that our parents started conditioning us not to be complainers back when we were babies, and that we are well trained to silently shoulder our burdens by the time we are adults. You need to push against that conditioning and training.

Your doctor needs to find out to what extent your symptoms were aggravated by the activity so that he or she can properly advise you regarding whether or not and to what extent you should try it again. Your friends and family deserve to know why you are no longer wanting to participate in certain activities with them. Your wife deserves to know why you no longer seem interested in being intimate.

From the perspective of your claim for fair compensation for your injuries, it will be difficult to establish the extent of your functional limitations if no one around you knows how serious those functional limitations are. There’s a big difference between being a whiner and complainer and simply being honest with how you are feeling.