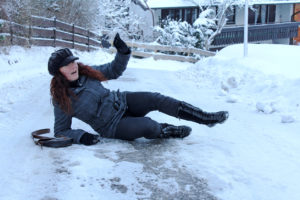 Is there any onus on pedestrians to avoid falling on slippery surfaces?

I made a case for safe and passable sidewalks in my last column Are you liable if someone slips on the sidewalk in front of your home?

One reader posted a comment that included this suggestion: “Maybe take responsibility for your own actions, if it looks slippery then adjust your movement accordingly.” The reader added disparaging comments about lawsuits and “getting lawyers rich”.

Disparaging comments aside, the reader has a point.

The law is not a one way street. Accountability for slip and fall injuries does not rest solely with the property owner.

An injured pedestrian will share accountability if they failed to take reasonable care for their own safety. That accountability comes from a legal principle called “contributory negligence”.

Step one is assessing whether or not the property owner is liable. And it’s not enough to prove that the walking surface was slippery, by the way.

Property owners are held to a standard of “reasonableness”, not perfection. A property owner is not expected to stand guard with a shovel and bag of salt 24 hours a day, for example.

The injured pedestrian must prove that the property owner failed to take reasonable care to ensure that pedestrians would be reasonably safe.

If successful, the property owner will take their best shot at proving that the pedestrian failed to take reasonable care for their own safety.

I am going to give you three examples where pedestrians have been found to have contributed to their injury through their own negligence.

In Garsha v. The Corporation of the City of New Westminster, 2005 BCSC 1251, there had been long standing problems of drainage over the sidewalk, resulting in ice formation. The City was well aware of the problems and had failed to take reasonable steps on the day of Ms. Garsha’s fall to deal with them. The evidence was that Ms. Garsha was very familiar with the area and also aware of the tendency for ice to form. The court found Ms. Garsha to be 25 per cent at fault concluding:

“In these circumstances, the plaintiff was obliged to take care for her own safety as well. She was aware of the possibility of ice and should have been more careful before venturing on to the sidewalk.”

That assessment meant that Ms. Gasha received 75 per cent of what the court assessed as the amount that would have fairly compensated her for her injuries and losses.

There was a similar result in Reidy v. Kamloops Hotel Ltd., 1997 CarswellBC 1475. Mr. Reidy, a 17 year member of the RCMP, had slipped and fell on a patch of ice and snow when leaving the Kamloops Inn after dealing with a complaint. He was, of course, familiar with the occurrence of ice and snow on Kamloops sidewalks in the winter, but the court found that:

“…an icy patch right outside the main exit of a beer parlour is an unusual danger which the defendants should have been aware of and taken steps to remove”.

The court assessed 33 1/3 per cent contributory negligence against him, concluding:

“The next question is whether the plaintiff was contributorily negligent. He was at the time wearing proper boots with a ‘Vibram’ sole. Unfortunately, when leaving the defendant’s premises, his mind was on the complaint which he had just dealt with. Given that he was aware of the conditions which existed that day, I find that he should have taken more care for his own safety.”

In Legault v. Brock Shopping Centre Ltd., 2010 BCSC 687, Mr. Legault had slipped on an icy sidewalk at a shopping centre. He had been very careful walking across the slippery parking lot, but once he got to the sidewalk he figured it would be safe because it was covered. Had he had looked at the surface; he would have seen that it, too, was icy. His boots were also loosely tied. The judge assessed him 50 per cent at fault concluding:

“He did not pay any attention to the ground at his feet, and I conclude that in the circumstances this failure to keep a lookout and the failure to properly secure his footwear were failures to take reasonable care for his own safety.”

There was an injured victim in each of these cases. The injuries were sufficiently significant to warrant the significant expense of a lawsuit. In each case, the injuries would have been avoided completely had the property owners followed their legal obligations.  Please, property owners, take reasonable care for the safety of those on your premises.

But of course, the higher the level of care taken by pedestrians, the less likely we are to be injured even in the face of dangerous conditions.

The very best claim is no claim at all. Let’s collectively act reasonably to avoid injuries and stop “getting lawyers rich”.