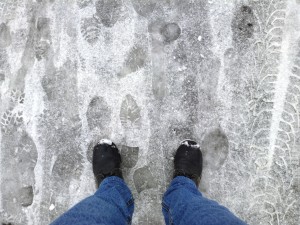 I never get sick.  I said those words as recently as last week.  I should have knocked on wood, because here I am with a sore and scratchy throat, feeling like hell.  It takes something away from the milestone experience of meeting the deadline for my 6th anniversary column.

That’s a lot of deadlines.  My first weekly column was published in the Westside section of the Capital News on January 7, 2007, so I’ve met over 305.

For many of those deadlines, I’ve puzzled much of the late evening to come up with a topic, laptop in bed, my wife kindly wearing wireless television headphones so I’m not bothered by whatever program she’s watching.

I don’t have that problem this time.  The topic of taking legal responsibility for sidewalk safety has become a “hat trick” with this third column on the subject.  There’s another reader to thank, coincidentally another lady named Carol.

This latest Carol responded to my position that those required by law to keep sidewalks safe should take the responsibility for doing so or face the legal consequences.  She took the opposite position.

She raised the responsibility of pedestrians, writing (I haven’t edited): “The problem is not the snow ploughs or the residents who can’t keep up.  The problem is with the idiots who don’t stay at home in the first place and if they insist or have to walk, and slip and fall, get up and shut up. being able to sue the homeowner is the usual, not taking responsibality for our own actions.”

However unhelpfully inflammatory her language, and extreme her position, there’s a valid point between the lines of her e-mail.  The law does, in fact, place a duty on pedestrians to take reasonable care for their own safety.

Sometimes, when assessing the competing duties, the balance falls heavily against the pedestrian.

It would be a rare set of circumstances, indeed, but not impossible to conceive of, when the law would require a pedestrian to “stay at home” to meet the duty to look after his or her own safety.  I am thinking about a freezing rain storm that leaves all sidewalk surfaces sheets of ice.  The law might find it unreasonable for a pedestrian to venture out at all until property owners had a reasonable opportunity to eliminate the hazard.

A more typical scenario where a pedestrian might share liability would be an obvious hazard that could have been easily avoided had the pedestrian simply paid attention to the sidewalk ahead of him.

Consider a readily apparent mound of ice that a pedestrian, taking reasonable care, could have avoided simply by side-stepping it.  The failure to side-step the hazard, resulting in a serious injury, could lead a court to attach some percentage of the blame to the pedestrian.

Wearing footwear that is unsuitable to a winter climate might also result in a pedestrian sharing liability.   Santa Claus solved that problem for my father by leaving ice-grabbing grips that attach to the bottom of his shoes in his Christmas stocking.  If you go out for a winter stroll wearing slick bottom shoes you are just asking for trouble.

I think I may have now milked the sidewalk safety cow quite enough with this trilogy of columns.  Don’t hesitate to send me more questions on the subject, though, perhaps we can stretch it to a fourth.

If you feel compelled to come by my office to wish me a “happy sixth anniversary”, please do so, and I will give you a “One Crash is Too Many” key chain.  I look forward to another year of sharing legal ideas and doing what I can to change driving attitudes and behaviours through this newspaper venue that I am so very thankful for.