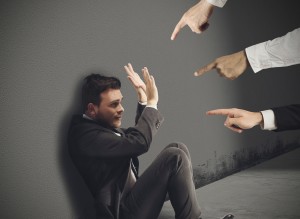 Blame the victim. The poor are losers. The unemployed are lazy. The beaten wife should have left him. The raped woman was wearing a short skirt.

We do it regularly, despite the fact this is a “politically correct” era. It’s more how we feel and relate to victims than how we talk about them. The poor are ignored. The unemployed are perceived to be milking the EI system. Beatings are swept under the rug. A rape victim is treated with suspicion, not compassion.

Victims feel it. It cuts like a knife. Why do we do it? Some say that putting blame on the victim saves us from recognizing that we could also be vulnerable to the same fate. We like the illusion of control, that we can avoid becoming victims ourselves. Bad things happen only to losers, lazy people, and women who are “asking for it.” Bad things won’t happen to us.

It simply make us feel better, when seeing another person who is suffering, to believe that we can avoid that suffering. It is scary to think that we are powerless to prevent bad things from happening to us. Some people go to the extreme of blaming a person’s karma, or otherwise attributing a cancer affliction or other source of suffering on the notion that it is some sort of moral payback for past misdeeds.

Whatever the reasons, it is a common social reality that further victimizes those who need and deserve to be supported. It is also a standard tactic insurance companies use to defend against car crash claims. A driver blows through a red light and broadsides a woman in a car. All the woman wants is fair compensation for her pain, her loss of income, and the expenses she incurs for medical treatment.

It starts out with blaming the victim for not doing enough to get out of the way. Then there are the seatbelt and headrest defences. Even though the crash would never have happened if the other driver had simply followed the rules of the road, and even though a seatbelt and headrest have no benefit in a broadside crash, the victim is blamed if the seatbelt wasn’t worn properly or the headrest not properly adjusted.

The victim is blamed for having an excessive amount of treatment for her injuries. She is also blamed if she has done too little to get better. If her symptoms do not resolve within a certain period of time, then the finger is pointed at the victim for being particularly susceptible to developing chronic pain.

Perhaps we will all appreciate what we have just a little bit more by recognizing that we could lose it all in an instant. How about we support victims instead of further victimizing them.