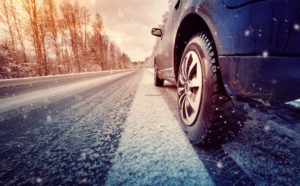 Winter tire season has arrived. They’re required on most British Columbia highways from the beginning of October until the end of March.

A reader prompted the topic, asking:

“I live in Kelowna and do not have the proper Winter tires, just all season’s. If I drive to West Kelowna after October 1st, with no snow or ice on the road, is my ICBC insurance covered if I get into an accident with all season tires?”

I love questions. Please, send them my way!

It would still be “yes” even if the road was covered in ice and snow.

You can blow through red lights and stop signs, speed through school zones, drive in the winter on bald summer tires, have your nose in your phone texting, or be taking and sending nudie selfies.

Or you can have such a gross lack of awareness of the road ahead of you that you crash into the back of a stopped vehicle, which represents fully 50% of my personal injury case load.

Unless amounting to a criminal offence, none of that would invalidate your ICBC insurance.

The risk of hurting someone else or ourselves, and an increase of insurance premiums, are clearly insufficient to have a real impact on driving behaviour.

But that’s not entirely fair.

For the most part, those who cause crashes are clueless about their dangerous driving behaviour.

Keeping between the lines, stopping for red lights and keeping track of speed limits is just too easy. The activity of driving has become the “background noise” of a commute, freeing our consciousness to wander.

And unless something unexpected occurs at a moment when our minds are elsewhere, we get away with it. That lulls us into the fantasy that we can drive safely without being constantly attentive to driving.

Winter tires contribute to the fantasy.

With good winter tires, we can drive in most winter driving conditions almost as if we are on bare roads.

Winter road conditions blend into the background noise, rather than being constantly on our minds. And we get away with it. Until something unexpected happens.

I grew up on a farm near Melville, Saskatchewan. We didn’t have winter tires.

I remember learning to drive on those winter highways, white knuckled. I was taught never to trust the road surface and to continually test traction.

I was a safer driver, on those “all seasons”, than all those winter tire equipped 4×4 drivers bombing around without a care in the world.

Most highways in BC require winter tires from October 1 through the end of March. Please obey the law.

But please don’t let those tires lull you into a false sense of security.

And please be exquisitely aware that winter road conditions do not neatly begin on October 1st and end on March 31st. If you come out to this year’s Kelowna commemoration of the National Day of Remembrance for Road Traffic Victims you can meet a grieving father who lost his daughter due to overdriven winter conditions in April, 2017.