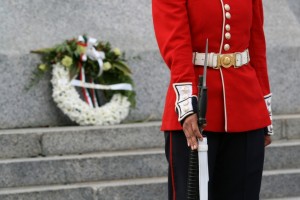 Six Canadian war planes depart on a mission to attack militants in Iraq from the air on Tuesday.  A Canadian Reservist, Cpl. Cirillo, is shot dead at the National War Memorial in Ottawa on Wednesday.

I was a young reservist as well, a member of reserve militia unit 734 Communication Squadron.

You carry a rifle but it has no bullets.  If your rifle were loaded, you still wouldn’t stand a chance in a surprise attack like that faced by Cpl. Cirillo.  It wasn’t an attack; it was an assassination.

The vehicular murder two days previously of a uniformed Canadian soldier in Saint-Hubert, Quebec had not yet sunk in for me in its significance of having been an extremist attack on Canadian soil.

Cpl. Cirillo’s public assassination, striking at the heart of our nation’s symbolism in our nation’s capital, has very effectively “brought home” for me a keen sense of home turf vulnerability that we have never felt before as Canadians.

We have learned a hard lesson that not having “boots on the ground” in an international conflict we choose to engage in does not insulate us from suffering casualties of war.  Standing up for what we believe in comes at a price.

My 13 year old daughter, Cassidy, was attending a “We Day” event in Vancouver on the same day.  We Day is a global movement of “Youth coming together to make the world a better place”.  The goal, as I understand it, is to turn a day’s inspiration into sustained action.

Cassidy had not heard the news of Cpl. Cirillo’s assassination that evening when she got off the bus from Vancouver.  I wonder to what extent she understood the gravity of the situation from my attempt to explain it to her on the drive home.

I guess I don’t really wonder.  How could the child possibly have a clue?

I no longer feel safe.

I feel powerless to do anything more than trust that those deciding, on our behalf, what we will stand up for with our military might, are making the right decisions such that the price we are paying, and will continue to pay, will have been and will continue to be worth it.

I also hope that We Day and other global initiatives will help generate change such that our future generations might once again feel the safety that I felt until this week.