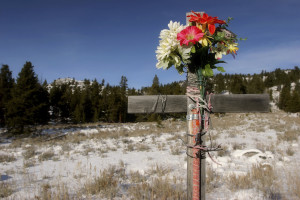 The passage of time doesn’t erase the pain of a loss.  It hasn’t for me, anyway.

I gather that it hasn’t for Eva Gainer, either, as I listened to her tell her story at the filming of a Shaw TV episode of “The Lunch Counter” in late January, 2013.  Eva Gainer, RCMP Cst. Bob Charron, and I were on a panel being interviewed by Shaw TV Producer Tamie Williams about road safety.

It was July 23, 2000, when Ms. Gainer’s life was horrifically altered by a drunk driver.  There were three fatalities: Eva’s husband and son were killed; the drunk driver also perished.  Eva, herself, was critically and permanently injured.

I first met Ms. Gainer at the National Day of Remembrance for Road Traffic Victims event I had organized in November, 2012.  Ms. Gainer attended and spoke as a representative of Mothers Against Drunk Driving (MADD), and also as a road traffic victim herself.

I will take this opportunity to thank others who helped make that event a success, particularly Mayor Walter Gray who had issued a proclamation, RCMP Cst. Kris Clark who brought a patrol car and took a turn at the microphone, Paul Nesbitt of Designated Dads who spoke passionately about the important service they provide, Calum MacMillan of Young Drivers who spoke, Magda Kapp and Maribeth Friesen who set up a brain injury awareness display on behalf of Braintrust Canada, West Kelowna Fire Chief Wayne  Schnitzler who was in attendance, and most importantly Kelowna Fire Chief Jeffrey Carlisle, who as well as speaking performed the important function of directing his crew to raise the ladder on the fire truck and use the flood light to illuminate the evening event.

Vera Tuningley was also in attendance at that event.  Her late husband, Stew, is the generous soul who had been picking up garbage along Shannon Lake Road in July, 2011, in broad daylight, in the ditch, wearing a reflective vest, when a young fellow lost control of his pick-up truck and killed him.

Pass these women on the street, and you wouldn’t have a clue.

Of course you wouldn’t.  Road traffic victims don’t walk around with signs around their necks.  In fact, most have learned not to talk about it at all.

We don’t want to hear it.  It is painful for us to hear the words coming out of their mouths.

And those who have lost loved ones are the tip of a very large iceberg.  Statistically, the five fatalities occurring in those three crashes represent the tip of an iceberg that includes approximately 1,200 people who suffered injuries (240 people injured per fatality), many of whom have ended up with permanent symptoms, like Ms. Gainer.

As much as we might not want to hear it, I think it’s important that we do.  It is only by recognizing the painful scope of the problem that we will be motivated to insist on and work towards a change in driving attitudes.  That’s all it takes, really.  Crashes are not inevitable.  It is exactly these types of stories I am publishing on my OneCrashisTooMany.com awareness website.

I invite those of you motivated to join me in my One Crash is Too Many campaign to attend the second annual One Crash is Too Many gala event that I am putting on again in partnership with Braintrust Canada, the beneficiary of funds raised at the event to assist them in their important work.  Tickets for the April 20, 2013, event can be ordered through the Braintrust Canada website.  E-mail me directly if you have any difficulty.