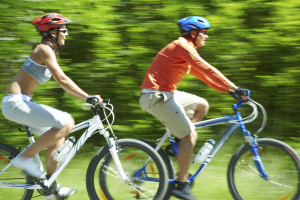 The Mission Creek Greenway is described on the Regional District web site as a green corridor and linear trail that is a mecca for lovers of the outdoors year round.  According to the site, more than 1,000 people use the trials each day for walking, running, cycling and horseback riding.

Cyclists can ride through that corridor without exposing themselves to the risk posed by the lack of care and concern shown by motorists to bicycles that I referred to in my August 11, 2011, column.

It is unavoidable that the Greenway crosses roads, but those crossings are protected by clearly marked crosswalks.

Particularly, where the Greenway crosses KLO Road, the crosswalk includes flashing lights that are activated by pushing a button.

Of course, traffic along KLO Road would not need the flashing lights to be alerted to the crossing.  The Greenway is so well known, the crossing is clearly marked with signs, and there is good visibility.

Last week Friday, a young woman cycling southbound on the Greenway rode up to the crosswalk, activated the flashing lights by pressing the button, and proceeded to ride across KLO Road.

She had been clearly visible to traffic, as she approached the crossing, for at least 50 feet.

There could have been no question in the mind of an approaching motorist that she was intending to cross as she approached the crossing and activated the lights.

She is reported to have suffered a severe head injury when a westbound vehicle struck her in the crosswalk.

I read about the collision in “The Okanagan Sunday” newspaper.  The brief article is credited to “Okanagan Sunday Staff”.  The article reports that the young woman was still in serious condition in the hospital on the Saturday.

Just like my last column, the only information I have about this tragic incident is contained within that newspaper article.  Well, that and my own Google Maps search that offers photographic views of the crossing.

Once again, the media portrayal of the incident casts blame on the cyclist.  In fact, the headline is “Cyclist failed to wait for traffic at lights”.  Absolutely no mention is made of the horrendous lack of care shown by the motorist who mowed her down.

The motorist suffered a broken windshield, by the way.

An RCMP member is quoted in the article as saying that the collision was avoidable, advising

“Don’t just activate the lights and assume traffic will stop…Stop, look and confirm traffic is stopping, and then cross.”

Apparently, depending on the young woman’s recovery, the police may charge or fine her for her “infraction”.

I agree, though I very much regret the reality, that you cannot assume that traffic will stop at crosswalks, even if traffic has had lots of time to watch your approach to the crosswalk and flashing lights are activated.

What I don’t agree with, and quite frankly if you could see my fingers shaking as I type this you would see that it is a passionate disagreement, is the unfair and dangerously one-sided way this tragedy has been publicized.

The dangerous attitudes of motorists faced by cyclists in the Okanagan are thereby perpetuated instead of curbed.

Let’s work together to make cycling in our community safer instead of more dangerous.