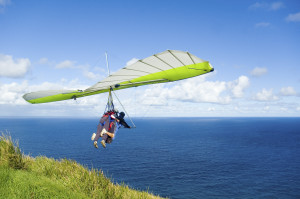 It was gut wrenching to read about Lenami Godinez’ first and last hang gliding experience, which had been an anniversary gift from her boyfriend.

They chose a tandem flight with a very experienced hang gliding pilot, taking off from Mount Woodside, known to be one of the safest launch sites in the Fraser Valley for winds and distances.  They managed all the risks that were within their control.

There was no problem with the launch, nor with the actual piloting of the light aircraft.

The cause of her 300 metre fall to her death may still be under investigation, but quite clearly she wasn’t harnessed in properly.

I don’t need to talk to the pilot nor the witnesses to know that important safety protocols to ensure the tandem passenger is secured to the hang glider were either not followed at all or not followed properly.

Ms. Godinez signed up for a dangerous activity.  However experienced a hang gliding pilot may be, mother nature is unforgiving and things can go wrong with wind currents that are not 100% predictable.  That’s not what killed her, though.  It wasn’t the inherently dangerous nature of the activity that was the problem.

What Ms. Godinez did not sign up for; what she would not reasonably have anticipated, was her pilot’s negligence in failing to strap her in properly.

Negligence is a legal word for when one person owes another a duty of care and fails to meet that duty causing the other losses, such as injury or death.

In our legal system, there are consequences for negligent conduct.  The injured victim, or the surviving family members of someone who is killed, can bring a lawsuit claiming fair compensation from the wrong doer.

I’ll leave for another day the woefully inadequate compensation available for wrongful death in this province.

What if there was a way to completely remove accountability?  Would that be a good thing?

I don’t think it’s a good thing at all, but it happens all the time.  Wouldn’t you know, it likely happened with Ms. Godinez.

If you put “hang gliding waiver” as search criteria in a Google search, one of the top hits is a waiver provided by the Hang Gliding and Paragliding Association of Canada (HPAC) of which this negligent pilot was a member.

Participants must sign the waiver, a legal document whereby the participant assumes all risks, including those which are inherent in the very nature of the sport, but also specifically including risks, these words taken from the document itself, “which result from human error and negligence”.

By signing the waiver, the right to bring a lawsuit to require compensation for losses arising from negligence is removed.  That precious accountability, which naturally increases the level of care, is removed.

Don’t sign the waiver, and you don’t get to enjoy the anniversary gift you were given.  In my experience, from other activities, waivers are presented after you have travelled to the activity location.

The same goes for any other physical activity, such as white water rafting, zip lining, and even the family activity of downhill skiing.  Have a look at the waivers you have been signing.

How did it get to this point, in British Columbia, that we are effectively forced to sign away accountability related to the very activities for which accountability is the most important?

We can change it if we want to.  All it takes is the political will to enact a law that would restrict the scope of waivers to not include negligence.  Call your local MLA to create that political will.

Published May 3, 2012 in the Kelowna Capital News