How heartless would you have to be, not to avoid driving over a duck waddling across a road? 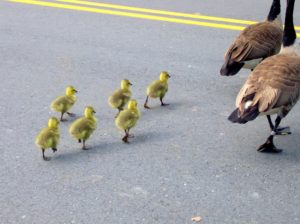 The headline, “Stunned by heartless driver”, drew me in to read a recent news article. A couple of ducks (one male and one female) were reportedly crossing a street in downtown Vernon. Two cars drove around them. But the driver of a truck didn’t. He drove over the male duck, killing it.

Ms. Czornobaj had stopped to save seven ducklings that were resting in a cluster on the left shoulder of a highway in Candiac, Quebec, back in June, 2010.

She had come to a stop in the left passing lane, closest to the ducklings. And then got out of her vehicle to fetch them.

Ms. Czornobaj was concerned about the ducks. She didn’t foresee the horrific scenario that played out moments later.

Andre Roy, his 16 year old daughter Jessie as a passenger, was riding his motorcycle in the passing lane, coming up behind Ms. Czornobaj’s parked car.

He was following another vehicle that blocked his vision of the hazard ahead. When that vehicle swerved to avoid crashing into the parked car, Mr. Roy had almost no time to react. He and his daughter were killed.

Yes, a completely different duck scenario. But it illustrates an important road safety principle. It is negligent, and in that case criminal, to put the wellbeing of human beings at risk to save an animal.

The Plaintiff in the case of Molson v. Squamish Transfer Ltd., 1969 CarswellBC 146, saw a small animal (she thought a dog or a cat) on the road as she entered an intersection. Fearing she would run over it, she came to a sudden, sharp stop. A transport truck was following too close to be able to stop, resulting in a collision and injury to the Plaintiff. The driver of the transport truck was found to be at fault, but Ms. Molson was assessed equally so.  The judge noted “The desire to save an animal’s life is natural and admirable but, of course, it cannot excuse all acts done in pursuance of it. If the choice is between an animal and human safety then, I should think, there is no real choice and the animal must suffer.”

That principle was affirmed by our Court of Appeal in Birk v. Dhaliwal, 1995 CarswellBC 956.

The driver in that case had swerved to avoid hitting a medium sized dog, resulting in a crash with a utility pole. A passenger had been injured. The driver was exonerated at trial and that decision was appealed.

The Court of Appeal found the driver was negligent. Quoting from the decision: “He failed in his duty to the appellant and the other passenger in his car to take reasonable steps to ensure their safety. That he did not want to hurt the dog was both decent and understandable but, as a matter of law, he did not owe a duty to the dog – he owed a duty to his passengers. In the circumstances, his instinctive reaction of veering off the roadway to avoid striking the dog was negligent.”

According to the news story I referred to at the beginning of this column, the lady interviewed didn’t believe the duck was run over by accident. If the truck driver indeed ran over the duck on purpose, that’s really horrible. But maybe he didn’t notice the duck until there was insufficient time to evaluate if swerving or abruptly stopping might risk the safety of other road users. If so, driving over the duck was the right thing to do.