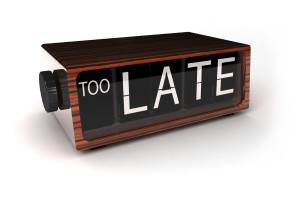 There are laws that “limit” how long you can wait before you commence a lawsuit.  In legal jargon, that time limit is called a “limitation period”.

Being late for work might get you a warning from your boss, but it typically won’t cost you a job. Arriving a few minutes late for your wedding might piss off your bride, but it’s not going to cost you your relationship. Missing most deadlines in our society can be forgiven or excused if you have a reasonable excuse, even if your excuse is that you simply forgot.  Perhaps you shouldn’t use the “forgot” excuse if you show up late for your wedding, though.

Show up at the Court Registry at 4:01 p.m. the afternoon of the 730th day after a car crash to commence your lawsuit and you might well have to kiss your claim goodbye.  Unless there are circumstances that kick in the laws that extend or delay the ticking of the clock, the auto insurer will have saved itself anywhere from $5-10,000.00 for a really small claim to millions.  Imagine the balloons, the champagne, the party hats, when the defence insurer finds out that you tossed away your claim by being late!

What about all those people who settle their car crash claims before the end of the limitation period?  With a typical car crash limitation period of two years, those claims are either very, very minor, or the defence insurer has brought out the party hats for an unfairly low settlement.  To find out why, have a look at my previous posting, “Want a quick settlement to your injury claim, Think again”.

Please, PLEASE consult with a lawyer to find out what limitation period applies to your particular circumstances. Ensure that the defence insurer doesn’t get an excuse to crack out the really expensive champagne.