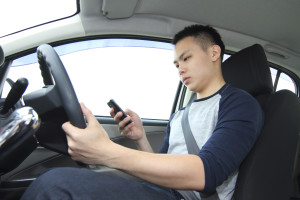 If British Columbians were polled, I expect that we would put texting at the top of the list of dangerous driving activities.

I don’t know if scientific studies have been done to compare the distraction of that particular activity with others such as eating, putting on make-up, programming an address into the navigational computer, or that activity my wife wrote a “letter to the editor” about: “road head”.

Whatever the science, there is not one British Columbian who would disagree, with a straight face, that texting while driving is near the top of the dangerous scale.

In fact, I bet that if any political party wanted to score extra points leading up to election day, they could do so by announcing severe penalties for texting while driving.

No-one would stick up their hand and say “Hold on, there.  That’s unfairly harsh.” like occurred to some extent with the .04 alcohol roadside penalties.

Good friends of ours were over for dinner within the last month.  The husband, like me, is a recent convert from Blackberry to the iphone.  An operations manager, he has researched, experimented and worked with a number of very interesting applications, or in the smart phone world: “apps”.

My buddy does a lot of driving.  The latest app he shared with me is one that allows him to send and receive text messages using voice commands.  How brilliant is that!?  You take one of the most dangerous activities imaginable and make it safe with a simple app.

Regular readers of this column can see the sarcasm dripping down the page.

Thanks to a grant from the United States Department of Transportation, a scientific study into the distraction of texting, by hand as well as by using voice commands, has been recently completed by researchers at the Texas Transportation Institute.  I would be pleased to e-mail anyone who asks a link to the April, 2013, report.

The study, conducted in an actual driving environment, concludes that a driver’s reaction time is doubled when distracted by reading or sending a text message.  The study demonstrates how texting drivers are less able to react to sudden roadway hazards, and finds that texting impairment is even greater than many experts believed.

The “actual driving environment” was a closed course, the driving complexity minimized by using a straight-line course that contained no hills, traffic or potential conflicts other than construction zone barrels.

“It is frightening,” the researchers wrote, “to think of how much more poorly our participants may have performed if the driving conditions were more consistent with routine driving.”

The kicker:  the study found no difference in driver distraction between manual texting and texting using voice commands.

Imagine that.  Imagine the problem with texting being more about the brain being occupied and less about holding the device.

Gee, I wonder if that is another nail in the coffin of the obvious conclusion that you are just as distracted by a cell phone discussion whether or not your hand is held up to your ear.

Is it any wonder that the news reported early this year that the Superintendent of Motor Vehicles was unable to prove that the hand held cell phone ban saved any lives?  Of course it hasn’t.  All the ban did was cost British Columbians a lot of money to install hands-free devices.  If anything, it increased the dangerous behaviour of cell phone use while driving by endorsing the hands free method.

I feel like a child: screaming and stomping my feet; nobody listening.

Published May 9, 2013 in the Kelowna Capital News