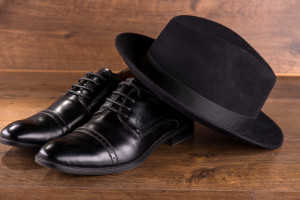 She is a police officer who has to be in control every minute of her work day.  She meets him, a prominent community leader, at a fundraising event.  The attraction is electric.  Cell numbers are exchanged and electricity builds with playful texts.

On him opening the front door of his home to welcome her inside, their lips to each others are lightening bolts to rods.

The playful tone of their texts gave him cues that led him to believe that she was not unlike other strong, successful women who have explored sexual tendencies with him, leading to mutually mind blowing encounters.

After their tongues explore each other’s mouths, he snaps into the assertive role, grabs her firmly by the wrist and swiftly pulls her over his lap.  His hand meets her now vulnerable behind with five very sharp, delicious, smacks.  This abrupt move had not been discussed.  To discuss it would have eliminated the intensity of the role playing.

He misread the cues.  She does not share his sexual tendency and her reaction to the brief spanking is not what he was expecting.  She is too shocked to tell him to stop, but he immediately perceives the lack of interest and snaps out of the role.  There is no bruising to her wrist, nor to her behind.

They go on a couple more dates, but their lack of compatibility has become clear and the relationship is short lived.   She does not admonish him for the brief spanking, nor does she report it to anyone.

That is, until ten years later when she comes out of the woodwork after a jilted long term lover makes allegations against the same man about their salacious sexual relationship that included consensual S & M role playing that cause him to lose his job and make headlines.

Substitute the police officer for a military officer and the spanking for being pushed up against the wall with a one handed throat hold and two slaps to the face and you have the Jian Ghomeshi story.

In an environment of sensitivity about spousal abuse, the incredible public “brand” of Jian Ghomeshi has been absolutely trashed for those who don’t “get” the sexual dynamics I tried to illustrate.  If you are one of those people, I can assure you without the help of Ipsos Reid that there is a multitude of women who are now dreaming about being pushed up against the wall by Jian Ghomeshi.

I shouldn’t be sexist.  There is a multitude of men as well.

How does Jian, up until now one of the most successful and well loved Canadian media personalities, “achieve justice” in this unfair scenario?  A years long lawsuit against the jilted lover whose allegations started this mess?  Unless she’s a multi-millionaire, the lawsuit would be meaningless.

His lawsuit against the CBC?  It wasn’t the firing that is destroying his “brand”; it is the allegations of what goes on in the privacy of his bedroom.  Without destruction of the “brand” he would still be a hot commodity, with potential employers lined up to woo him away from the CBC.

How about a claim against the military officer?  My column assumes that everything she said in her interview was true.

Lawsuits can go only so far to redress wrongs in our society.  Once defamatory allegations hit the public eye the toothpaste cannot be forced back into the tube.  I see this as similar to a personal injury lawsuit being inadequate to redress wrongful driving for those left with a lifetime of pain and functional limitations.  No financial settlement or legal judgment will ever give you your life back.

What is the answer?  The only answer is to avoid the “wrongs” in the first place.  It’s perhaps impossible to stop jilted lovers from trying to scratch the eyes out of their exes; it should be easier to get the driving public to pay attention to the road ahead of us.

This column should be read in conjunction with my subsequent apology as related to consent in the context of sexual assault:  No “Grey” Area in Consent

Published in the Kelowna Capital News on November 5, 2014