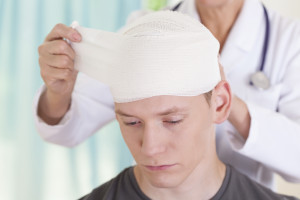 I was at a conference this past weekend. It was about traumatic brain injuries.

In simple terms, a traumatic brain injury is an injury to the brain caused by trauma.

Yes, there are other brain injuries, such as those caused by blood clots and whatnot.

I have three children, aged two, four and six. What I learned in the conference has led me to be a whole lot more concerned about protecting my children’s heads.

It has also given me useful insights to assist me in recognizing traumatic brain injuries that may have been suffered by my car crash clients.

The biggest piece of bunk is the notion that if there was no loss of consciousness, there could not have been a brain injury.

Not long ago, some medical specialists hired by the insurance company regularly gave that opinion. That opinion still rears its ugly head from time to time.

I was armed this weekend with a piece of ammunition that I can use to blow away the bunk if it ever comes up in one of my cases.

It’s a true story about a fellow who suffered a severe brain injury but did not lose consciousness. His name was Phineas Gage. Look him up on the Internet. It’s a heck of a story.

Gage was using a heavy metal rod, which in my farming days we referred to as a crow bar. It was just over a metre in length and three centimetres in diameter. He was using it to tamp down dirt over a dynamite charge.

He must have tamped a little too hard because a blasting cap turned the crow bar into a missile. It smashed up through the left side of Gage’s face, through his left eye, up into the frontal lobes of his brain and out through the top of his skull.

This was in 1848. Even if it was present day, with our medical technology, I would have pegged him a goner for sure.

He never lost consciousness. To those around him, he seemed perfectly fine.

If you hadn’t known him before this horrible incident, you might not have had a clue that the severe damage to the frontal lobes of his brain had any impact on him.

His IQ may not have changed, but his personality sure did. In the words of a newspaper account at the time, he became “crude, uncaring, impulsive, irrational, antisocial.”

His case was a clear example of how important it is to have people to testify on your behalf who knew you both before and after an injury. Whatever the medical specialists have to say, cases really come down to the simple question: “How are things different since the injury from what they were before the injury?”

Phineas Gage had a steal rod go through his head and suffered a severe personality change as a result. He clearly suffered an injury to the brain. He didn’t lose consciousness.

If anyone ever tells you that you have to lose consciousness in order for there to have been a brain injury, tell him or her about Phineas Gage. You can find sites that show models of the steel bar through his head on the Internet.

In future postings, I will write about other bunk, such as the bunk notion that you cannot suffer a brain injury as a result of a whiplash scenario.

Be vigilant to note changes of personality, as well as forgetfulness and other cognitive issues that might arise after a car crash. While there are very few treatment options for brain injuries, you can at least help ensure that proper compensation is provided for this