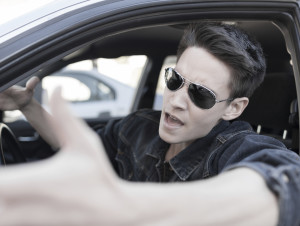 There’s a dangerous driving mentality out there.

I’m sure you’ve witnessed it countless times.  It happens to be a pet peeve of mine.

The thing is, the idiot drivers who have that mentality think they’re in the right, and are the ones you might see flipping the bird to prove their point.  I’ll refer to that type of driver as “Righteous One”.

God forbid you turn onto the highway in front of Righteous One and he has to slow down a little while you get up to highway speed.  Righteous One doesn’t slow down until the very last second before his bumper would otherwise hit yours.  You can then count on being tail-gated for a while.

Righteous One thinks he’s following the rules of the road and that you are not.  He gets pissed off.  He creates a close call by not taking evasive action until the very last moment.  He’s trying to teach you a lesson, showing you that you nearly caused a crash.

To make matters worse, he doesn’t behave like this just with other motorists.  Righteous One sticks his chest out and pushes his perceived right of way with cyclists and pedestrians as well.

I have news for you, Righteous One.  Aside from being an idiot, you’re wrong.

The technical rules of the road are qualified by an overall duty of care that vehicle drivers owe to other drivers.  That duty to drive carefully extends especially to cyclists and pedestrians because greater harm could come to them if care is not taken.

Instead of fulfilling his duty of care, Righteous One is taking a potentially dangerous situation and making it worse.  Instead of being patient and courteous, and eliminating any potential danger, Righteous One creates even greater danger.

If you were sitting on a jury, whom would you find most blameworthy for a crash: the driver who honestly misjudged and mistakenly pulled out a little too close in front of the next vehicle, or Righteous One, who stuck his chest out and thought he’d teach that driver a lesson?

Taking care means driving defensively.  It means immediately slowing down if you see a potential hazard.  It means recognizing that you’re in control of a 3,000 lbs projectile that could forever change a person’s life, or even end it.