You’re cruising up the curb lane. Traffic next to you comes to a stop. Do you smile as you sail past or immediately go on high alert? 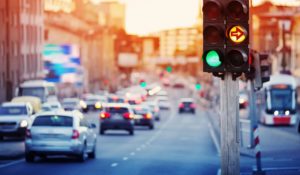 Stopped traffic in a lane next to you can both create and conceal a hazard.

The potential hazard is another road user seizing the opportunity to cross in front of that stopped traffic. And to continue into your lane directly in front of your vehicle.

Your view of that other road user, and their vision of you, is likely blocked by the stopped traffic.

But you’re not facing a stop sign or a red light. Isn’t it up to that other road user to ensure it’s safe before entering your lane?

Driving with the attitude that right of way is the be all and end all is the antithesis of defensive driving. And does not measure up to the legal duties we owe other road users.

Ms. Lutley had been cruising along the curb lane on Oak Street, a six lane thoroughfare in Vancouver.

Ms. Southern came up a side street from Ms. Lutley’s left side and faced a stop sign.

Oak Street traffic faces a flashing green light at that intersection. Pedestrians can push a button to change it to red to allow them to cross.

A pedestrian did just that. And five lanes of Oak Street traffic stopped. There was no one in the sixth, curb lane.

Ms. Southern arrived at the intersection around the same time as the light changed back to flashing green. But she took advantage of the still stopped traffic to cross Oak Street as well. Those who had stopped for the pedestrian kindly waited for Ms. Southern to make it across.

The light had already been flashing green for a few seconds as Ms. Lutley approached the intersection in the curb lane.

Appeals are heard by a panel of either three or five judges. This appeal was heard by three.

Mr. Justice Chiasson did a careful (and very interesting) analysis of rights of way and concluded that Ms. Southern (the one facing the stop sign) actually had the right of way over Ms. Lutley. But because Ms. Southern failed to exercise sufficient caution entering the open curb lane she was tagged with 15% liability: “A dominant driver passing through an intersection who is confronted with a new risk, a seemingly empty curb lane the view of which is obstructed – must proceed with some caution”.

But Mr. Justice Donald writing for the two judge majority found the two drivers roughly equally at fault, with this commentary on right of way:

“[55]  Both drivers proceeded in the intersection at lane 6 without knowing whether it was safe to do so. Neither could see the approach of the other. They were both careless in causing the accident.

[56]  With all due respect for the contrary view, I do not think the apportionment of fault in this case depends on the statutory provisions governing the right of way. Each party can assert a right of way but, on the facts, neither exercised the common law duty of care in a situation requiring caution.”

Bottom line:  exercise caution regardless of whether or not you think you have right of way.