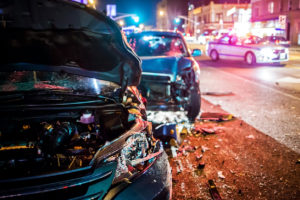 That’s my blunt paraphrasing of a small claims lawsuit against ICBC. And it makes me feel sick to my stomach.

The lawsuit arose out of a single vehicle crash that occurred on Feb. 14, 2016. The driver had collision insurance on her 2013 Hyundai Santa Fe.

Collision insurance entitles you to ICBC reimbursement for damage you cause to your own vehicle.

It’s a fair and reasonable insurance product, particularly if you buy into the “everyone makes mistakes” notion. That’s what insurance is for.

Fire insurance kicks in if you inadvertently leave a pot of oil cooking on the stove and burn your house down. Similarly, collision insurance is for when you do an “oopsy-woopsy” behind the wheel and your own vehicle is damaged or destroyed.

Remember the news story about the Ferrari that was run into a utility pole? According to the story (click here for that story), ICBC had already paid close to $800,000.00 for the damage to the car, and proceedings were ongoing for even more. That’s collision insurance.

Thank goodness for those of us concerned about ICBC insurance premiums, Santa Fes are worth a whole lot less than Ferraris!  The claim in this lawsuit is “only” $25,000.00.

ICBC is defending the claim with the allegation that the driver breached the terms of her policy by driving while intoxicated to the extent that she was incapable of controlling the vehicle.

Did you know that by driving drunk you not only put innocent lives in danger, but you might not have any insurance protection?

There is a “Prohibited Use” section of our legislated insurance policy (Section 3 of Schedule 10 of the Insurance (Vehicle) Regulation, B.C. Reg 447/83 – click here for a link to the schedules if you wish). In sub-paragraph 1 it says that ICBC “…is not liable to an insured who breaches this condition”.

Down in sub-paragraph 9, it says that “It is a breach of this condition if an insured is operating a vehicle while under the influence of intoxicating liquor or a drug or other intoxicating substance to such an extent that the insured is incapable of proper control of the vehicle.”

An interim court decision exposes the distasteful dialogue at the beginning of this column. The decision can be found here: Seeley v. ICBC, 2018 BCPC 59 (CCanLII). In the second paragraph the judge says this:

[2]      At issue is a single vehicle accident in which Ms. Seeley was the driver and sole occupant. At the time, she evidently gave two different versions of what happened leading to the accident. The one she stands by is that she was texting. The Defence theory is that Ms. Seeley was impaired at the time of the accident and was incapable of driving her vehicle in a safe manner. The Defendant also alleges that the Claimant made false statements to the Insurance Corporation of British Columbia, including that she had nothing to drink before the accident.

While illegal, it is not a breach of your insurance policy to text and drive. It’s worth $25,000.00 to Ms. Seeley to establish that it was texting that caused her to lose control and crash her vehicle instead of alcohol impairment.

Actually, it’s worth a bit more than that. ICBC is counterclaiming against her for the $6,388.77 that ICBC paid to replace the power pole that was sheared in half as a result of the crash.

Choosing to text while driving is not an “oopsy-woopsy.”

Neither is talking on a cell phone while driving. In my view, making the conscious choice to participate in such behaviours that distract you from the very important task at hand should void your insurance coverage just like driving drunk.

If bad drivers took financial responsibility for their bad choices, the rest of us wouldn’t be facing increasing insurance premiums.