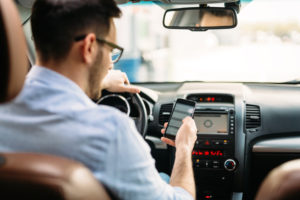 A Kelowna “N” driver veered out of his lane last week.

The high school student was about to turn into the Rutland Senior Secondary school parking lot.
One of my staff, in the next lane, swerved to get out of the way, but there was still minor contact between the vehicles.

The student’s explanation?  He had been texting.

My staff member was able to brush off the paint that had rubbed off from the teenager’s vehicle, leaving no lasting damage.  And she was not injured.

Contrast that with the 19-year-old in Gatineau, Quebec, who on June 8, 2017, veered out of her lane killing an oncoming motorcyclist.

And the 20-year-old that same evening, near Clinton, British Columbia, who veered into the oncoming lane of a semi-truck causing both drivers to lose their lives.

We don’t know what, exactly, distracted those two drivers, but in my view it doesn’t matter. It’s even less technically difficult to keep a vehicle between the lines than it is to do so with a crayon and a coloring book.

It’s never a matter of technical skill that causes these crashes, it is a lack of attention.

Whether it’s a text message, cell phone discussion or daydreaming that distracts you from that critically important task, it’s all distracted driving.

But as I’ve illustrated, consequences can be dramatically different.

And there’s the true problem.

You catch yourself veering out of your lane from time to time, miss the odd turn-off, and have those “heart in throat” close calls every once in a while.  But, thankfully, no crash.

It is only that one in 100, or one in 1,000 circumstance when lack of attention will lead to a crash.

The thing is, the more kilometres of crash-free inattentive driving:

It’s the same for impaired driving.

When we hear about the kinds of horrific crashes that occurred last week, we tend to think: “that’s never going to happen to me.”

Please make a personal commitment to pay direct attention to the road, 100 per cent of the time.

And please demand that of others around you as well.

How about take the simple but important step of refusing to engage in a telephone discussion with someone who is driving?

Want ammunition for the proposition to avoid talking on hands-free while driving?  Send them these links:

You’ll piss off some people, but you’ll make our roads safer.