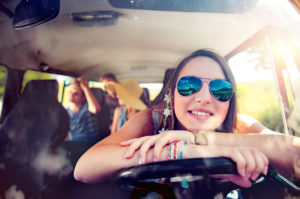 “Can I go on a short drive with a new driver with other people in the car?”

For those unfamiliar with British Columbia’s graduating licensing program, the last stage of the process is a “New Driver.”

A New Driver must display an “N” and is restricted to one passenger who is not their immediate family.

My teenage daughter was asking my permission to get a ride home with a New Driver who was taking other friends home as well.

It was a text message. My texted response:

“Would you go for a short drive if he was drunk?”

I followed, in quick succession, with the following texts:

“What if there were no seatbelts?”

“What if he was talking the whole time on his cell phone?”

She emphatically affirmed that she would not be a passenger in any of those scenarios.

Why is the “New Driver” passenger restriction any different for her?

She has learned that some rules are more important than others. For the unimportant rules, a little cheating is ok, right?

Our last visit to Vancouver’s Science World is an example. Kids have to be at least 13, which they call a “youth,” to be unaccompanied. It’s not good enough for an 11 year old to be accompanied by his 15 year old sister.

Yes, we tried to get away with breaking that rule. Hopefully, next time, our son will know better than to shout out “I am not a youth!” while we’re buying their tickets!

If the rule is about driver distraction, why does it not apply to immediate family members? Why is there no restriction at all on number of passengers if a 25 year old license holder is sitting beside you?

A little googling will give you the answer. Passenger restrictions for new drivers are based on science. And yes they are important.

Check out this study from May, 2012: Teen Driver Risk in Relation to Age and Number of Passengers.

Having even one passenger under age 21 increases a 16-17 year old’s risk of a fatal crash by 44 per cent.

With two passengers, the risk is doubled.

With three or four, it’s quadrupled.

Conversely, having an older passenger (35 years or older in this study) actually decreases the risk by 62 per cent.

Why is it more dangerous for teenagers to have peer passengers? It’s interesting stuff that I could not possibly “nutshell” in a convincing way in this column.

One issue, apparently, is that research has found that the prefrontal cortex of the brain — the region responsible for weighing the consequences of risky behavior — is the last part of the brain to develop. According to one study, “Novice drivers (15 to 17 years old) are at a distinct disadvantage, not only because of their limited driving experience, but also because of their incomplete brain development.”

Add in an inclination to display a reckless disregard for authority, and “show off” to their peers.

Simply, new drivers are more easily distracted and more likely to take risks when other teenagers are in the vehicle.

Are you a parent of a teen? Help them understand that these rules are important.

Here is a neat video tool that might assist you and your teen understand and therefore reduce the risks of teen driving.

If driver safety isn’t enough of a motivator, perhaps talk practically to your teen about the traffic ticket and points the driver will face if caught by the police.

The vehicle occupants could agree, in advance, to pitch in for the fine. The three points against the driver’s license cannot be (which depending on circumstances could dramatically increase vehicle insurance and/or cause the driver to lose the license altogether). A good friend would not let their friend take that risk.