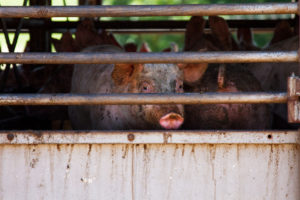 Is there any sweeter justice than when someone tries to be nasty but it blows up in their own face?

Even sweeter if the intended victim manages to benefit from the nasty conduct.

Sweet justice was achieved after an animal rights activist in Ontario was reported to police for feeding an “unknown liquid” to thirsty pigs.

You might have read news headlines and reports about this incident. The most reliable telling of the story comes from Mr. Justice D.A. Harris in his May 4, 2017, decision acquitting Anita Kranjc of the criminal charge of mischief (R. v. Krajnc, 2017 ONCJ 281). I found it incredibly entertaining and recommend that you read it!

It was, and still is, a “fairly routine” event for animal rights activists to gather on a traffic island, placards in hand, one hundred metres away from a certain slaughterhouse in Ontario. They gather to “bear witness” to and protest against the suffering of pigs being delivered for slaughter.

Transport trucks loaded with pigs pull up to the red light at this last intersection before the slaughterhouse. This gives the activists an opportunity to interact with the pigs through open air sides of the trailers.

Activists at times speak to the pigs, pet them, and offer them water. These interactions are recorded and posted on social media.

“…Ms. Krajnc believes that by providing water when the pigs are thirsty she hopes to provide some relief, even if it is only incremental, and only for a moment.”

Mr. Justice Harris described the events of June 22, 2015 as follows:

The truck driver called his employer. The police were called and Ms. Krajnc was charged with a criminal offence called “mischief.”

The offence of mischief comes from section 430 of the Criminal Code.

A person commits mischief by willfully obstructing, interrupting or interfering with the lawful use of property.

The judge set out the prosecution theory as being that “Ms. Krajnc gave ‘an unknown substance/possible contaminant’ to the pigs thereby creating a risk that the slaughterhouse would refuse to take them.” Obviously, this was the concern that would have been expressed by the farm representative who called the police.

When looking at the evidence, it became very obvious that it was a baseless concern. Not only was it baseless, the evidence pointed to it not even being a genuinely held concern:

1. Ms. Krajnc offered to give the bottle of water to the truck driver to have it tested, but he refused the offer;

3. The slaughterhouse did not refuse to accept the truckload of pigs, even though they were aware of protesters giving water to pigs. The judge said that “As far as I know, every pig on that truck went on to be slaughtered and processed and passed on to consumers in the usual fashion.” The judge went on to note that the slaughterhouse had never refused to accept a load of pigs by reason of protesters giving them water;

A baseless concern, not genuinely held, resulting in a criminal charge? How’s that for “nasty!” 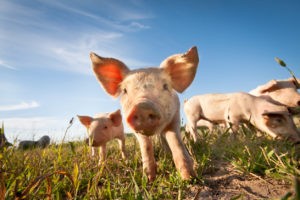 Ms. Krajnc and her cause got a whole lot more media (and therefore public) attention than she could have hoped for standing on a traffic island holding banners and placards.

It was a five day trial, the time occupied mostly by expert witnesses called by Ms. Krajnc’s defence team, including:

1. Dr. Lori Marino who gave evidence that pigs are similar to dogs in level of intelligence and emotional and psychological characteristics, have a complex communication system and a number of different personality traits. They empathize, experience joy and happiness, and are sentient (capable of feeling good or bad depending on circumstances). She also gave evidence that they suffer both physically as well as psychologically in a factory farm setting;

2. Professor Tony Weis, an expert in geography and environmental studies, who “…warned that as the population of the Earth grows, using factory farms to create animal meat for human consumption will result in humanity’s inability to feed itself.” He also “…discussed the concerns about how factory farming is a prime cause of greenhouse gas emissions and global warming”; and

3. Dr. David Jenkins, an expert on human nutrition, who provided his opinions about how eating meat, and processed meat in particular, contributes to cancer, heart disease and diabetes.

Mr. Justice Harris noted that the courtroom was full of spectators on each of the five days of trial, with every seat taken and many sitting on the floor. Members of the press sat in what normally would be the prisoner’s box. Permission was granted to send live tweets of the proceedings.

The irony of the situation was specifically referred to by the judge. Quoting paragraphs 131 and 132 of his decision:

[131] That may be the most ironic aspect of this case. The fact that Ms. Krajnc gave water to a pig received limited attention initially. In contrast to that, Ms. Krajnc being charged and tried, with five days of evidence, one day of submissions, and one day for this judgment along with countless remand appearances have provided her and her movement with all of the publicity they could hope for.

[132] Conversely, the act of prosecuting Ms. Krajnc has probably led to enough bad publicity for the pork industry that it might be said that the prosecution actually accomplished what they accused Ms. Krajnc of trying to do.

I grew up on a small farm outside of Melville, Saskatchewan. We raised hogs, and I grew up on a meat and potatoes diet, a diet I continue to enjoy. If ever there was a person least likely to be swayed by the message of activists like Ms. Krajnc, it might be me.

Our farm environment was completely different from that of a “factory farm.” I fondly remember the pigs, and feeling protective of any notion of their suffering. I was reminded, reading about the evidence in this case, of the darling “personalities” of the pigs we raised. I was also reminded of the environmental and health issues that have come to my attention from time to time over the years.

You might also enjoy: Silencing sexual abuse against children by Paul Hergott