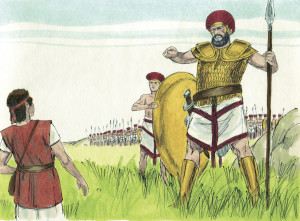 Justice was far from served, but Eric Tough has bragging rights and the Insurance Corporation of B.C. had its head handed to it.

The provincial court decision in Tough versus ICBC handed down last week (Link to the case: Tough v. ICBC and Gannon, 2010 BCPC 307) and the story hit the local news media in short order. The story makes for compelling news. It is classic David and Goliath tale, with a legally unrepresented 17-year-old pitted against the awesome power of the ICBC.

The slingshot and stone came in the form of the principled tenacity of the 17-year-old’s stepfather, Bob Enns. I will nutshell the story for those of you with your heads in the sand.

The 17-year-old was driving his first car. While making a left-turn, his car was broadsided by an oncoming truck. The insurance adjuster decided that the young man was totally at fault, saying:

“People turning left are always in the wrong.”

Enns appealed the decision to the manager of the claims office on his son’s behalf.

A meeting was arranged but the result appears to have been prejudged, and, in fact, the written rejection was already in the mail the day before the meeting took place.

ICBC’s liability finding meant the 17-year-old was not compensated for the loss of his car. It also resulted in a 75 per cent increase to his insurance premiums. That increase priced the young man out of owning another vehicle for the three years after the crash.

For most people, the story would have ended with the adjuster’s initial decision.

Most people seem to trust what insurance adjusters have to say. But Bob Enns isn’t like most people.

He sued on his stepson’s behalf, claiming reimbursement for the value of the $750 car that had been destroyed in the crash.

He brought the lawsuit without a lawyer. He put his faith in our judiciary, and rightly so. ICBC used a lawyer and defended the claim and it went all the way to a trial.

The provincial court judge did what I believe the insurance company should have done in the first place. She fairly and judiciously reviewed and weighed the evidence and found that the original determination was wrong.

Not sort of wrong, or partially wrong, but totally wrong.

A court decision trumps an insurance company decision every time.

Tough was paid $750 in compensation for the loss of his car and his insurance premiums plummeted. He can now afford to own a car again. I started out by saying that justice was far from served.

I say that because the insurance company has yet to be held to task for the fact that Tough had to rely on buses and other alternate transportation for the last three years as a result of its behaviour, which the judge said, in a gross understatement, did not reflect well on the defendant corporation.

I wonder if ICBC will offer any compensation to Tough to right that wrong.