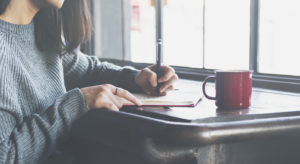 “You want me to sit down and make notes to “journal” how I was before the crash?”

Yes, I do. As soon as possible. Before your memory fades, because ICBC claims require evidence.

“But what does that have to do with my injuries and the huge impact they are having on my life right now?”

You can barely get yourself out of bed. The tissues in your neck and back are so inflamed, you are stiff as a board when you move about. Your pounding headache is clearly visible in your face.

Nobody is going to question how bad things are right now.

But, thankfully, the inflamed tissues will calm down. With therapies and participation in a stretching and strengthening program, the range of motion in your neck and back will be completely restored.

You will learn how to manage your ongoing pain and headaches, allowing them as little visible impact on you and the way you live your life as possible.

Like so many who live with pain, you will appear perfectly fine to those around you.

Two to three, maybe four years have passed since the crash. You have reached a permanent plateau in your recovery. This is the way you are likely to live out the rest of your life.

However difficult those first years were, when your symptoms were at their worst, that was a sprint in comparison to the marathon you face at your permanent plateau.

It is that plateaued level of symptoms and permanent impact on your life (which I refer to as your “condition”) that most determines what level of financial compensation for your ICBC claim is fair.

But it’s not that straight forward.

You are compensated for loss.

Loss is the difference between how things turned out to be after a crash and how things would have been had the crash not occurred.

The only way to assess your loss is to determine “how things would have been had the crash not occurred,” and ICBC claims require evidence of your pre-crash condition.

The starting point is how things were during the months, and years, leading up to the crash.

But if I ask you, three to four years later, how often you had headaches in the year before the crash, what will you say? Many people will look at me with an exasperated look on their face: “How can you, or anyone, expect me to remember that!?”

If an ICBC defence lawyer asks you that same question, and you give that same answer, he or she will cross headaches off the list of symptoms they need to compensate you for. If you don’t remember the frequency and severity of your headaches leading up to a crash, how can you say your post-crash headache plateau is any different?

Well of course it’s different. Isn’t it? You don’t remember being bothered by weekly headaches before the crash! But your level of compensation is determined by the level of loss. How can that level be determined if you can’t tell me your approximate pre-crash headache frequency?

Is the advice at the beginning of this column starting to make sense?

When thinking back and journaling your condition in the months and years leading up to the crash, it’s important not only to list your symptoms and how they impacted on your life, but also to describe the pattern of those symptoms over time.

Were they at an unchanging plateau? Were they gradually getting worse? If so, at what pace? Perhaps you had been injured recently in another incident, but your condition was improving?

Medical specialists, when providing opinions about how things “would have been,” need to know this information. Newton’s law of motion (an object will remain at rest or in uniform motion in a straight line unless compelled to change its state by the action of an external force) applies remarkably well to a medical condition.

So please. If you or someone close to you has been in a crash. Follow or pass on this important piece of legal advice to “journal,” with as much detail as possible, your condition leading up to the crash while your memory is still fresh.