Is lying really an important milestone in childhood development?  If so, we come by it honestly! 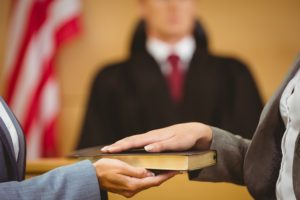 It’s certainly common among adults, ranging from little white ones up to real doozers.

It is difficult to catch someone in a lie. And consequences are usually minimal.

There are procedures that make lying much more difficult in a courtroom, cross-examination being one.

But a good liar, weaving their story around known facts, can go undetected. To dissuade those who think they might get away with dishonesty in the courtroom, we have made lying under oath a criminal offence. And the courts apply suitably severe sentences.

Part of the dispute had to do with damaged linoleum. The landlord, Mr. Chima, presented an estimate of $2,763.81 for linoleum replacement. When specifically questioned about whether or not he had paid to have the linoleum replaced, he testified that he had which was a lie.

It was a ridiculous thing to lie about. Whether or not he had actually followed through with replacing the linoleum was unlikely to have had an impact on the outcome of the case. The sentencing judge noted “…one must fairly conclude that there is no evidence that the accused benefited from his crime.”

Mr. Chima had no criminal record.

With no criminal record and an inconsequential lie, you might have expected Mr. Chima to face a “slap on the wrist”.

The judge in Chima quoted from two previous cases where perjury was committed in the context of criminal prosecutions.

From one: “Perjury is under ordinary circumstances a most serious offence. It undermines the very cornerstone of the administration of justice in our courts.”

And from another: “Perjured testimony strikes at the very heart of the judicial system. The court has always taken a most serious view of such offences and lengthy sentences are the usual course.”

The judge considered whether the crime was less serious because it arose in a civil rather than a criminal trial. He concluded that it was not: “The commission of perjury, whether in a civil or criminal case, visits the same type of damage on the judicial system. The system is absolutely dependent upon the honest evidence of those testifying under oath or affirmation.”

Mr. Chima was sentenced to 12 months in jail.

Perjury is treated just as seriously in pre-trial proceedings.

In R. v. Foster, 1982 CarswellSask 186, a chief executive officer lied during an examination for discovery in a wrongful dismissal lawsuit and was sentenced to eight months imprisonment.

And in R v. Lukasik, 1982 CarswellAlta 184, a 30 year old mother of four was sentenced to 9 months in prison for making false accusations of attempted rape against an innocent party during an preliminary hearing.

If you are ever called on to testify as a witness in a court proceeding, please take your oath (or solemn affirmation) seriously. Justice depends on it. And you face very serious consequences if you give perjured testimony.