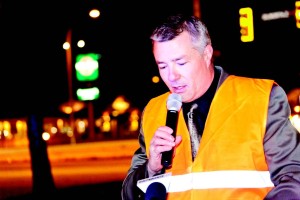 Thank you for attending our commemoration event on November 21, 2012 – Canada’s fifth annual National Day of Remembrance for Road Crash Victims.

REMEMBRANCE…Paul Hergott, a Capital News columnist and advocate for safer driving habits, led the National Day of Remembrance for Road Crash Victims service held in the Orchard Park Mall parking lot last week. In the last five years, 578 people have been killed in car crashes in the Southern Interior, with an average of 116 people killed every year. Speeding is the leading cause of car crash fatalities in B.C. On average, 47 people are killed each year in the Southern Interior in speed-related crashes. Each October there is an average of 33 crashes resulting in injuries or death in the Southern Interior due to people driving too fast for the conditions. That number more than triples in December to 109 as the driving conditions worsen. The National Day of Remembrance is intended to acknowledge traffic accident victims and encourage drivers to reflect on how their own driving behaviours can help keep themselves and everyone on our roads safe.