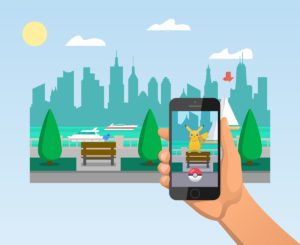 A zombie, following a Pokemon, steps out onto the street ahead of your vehicle.

You see it coming “a mile away”.  You’ve heard of the Pokemon craze that has zombified the population; folks wandering around with their eyes glued to the screens of their cell phones.

It’s broad daylight and this particular zombie has all the characteristics.  He’s watching the screen of his cell phone, not where he’s going.  He’s mid-block, not at a crosswalk.  He’s blindly walking into the street.

You feel confident that you have the “right of way”, and you would be correct.  Section 180 of the Motor Vehicle Act provides:  “When a pedestrian is crossing a highway at a point not in a crosswalk, the pedestrian must yield the right of way to a vehicle.”

So, of course, you confidently maintain your speed and continue forward.

Oopsie!  Not only would that be about as morally bankrupt as could be imagined, that would offend section 181(a) which requires you to “…exercise due care to avoid colliding with a pedestrian who is on the highway”.

Morality and “rules of the road” aside, I expect that there is a Criminal Code provision that would put you behind bars for a long time if you made the conscious choice of mowing down a pedestrian because you had the “right of way”.

By the way, the word “highway” in the Motor Vehicle Act is very broadly defined to include all manner of roads, streets and lane-ways (see section 1 of the Act).

Another “by the way” is that the Motor Vehicle Act is readily available online, along with the Criminal Code and all other provincial and federal pieces of legislation.  Please e-mail me if you have any difficulty accessing those resources and I will be happy to help you out.

What if you are what I might refer to as a regretfully “typical motorist”, not paying your full, direct attention to the road ahead of you?  Your direct attention might be on a cell phone conversation, what happened at the office that day, some drama with a friend, or driving has become so second nature to you that you drive in “autopilot”.

You could have recognized the hazard of a jaywalking Pokemon zombie pedestrian about to walk in front of you “a mile away” but you don’t.  Instead, your brain kicks into gear when it’s too late, and the pedestrian flies over the hood of your vehicle.

If the injured zombie made a claim against you, would you be found “liable” to compensate him for his injuries and losses?  Should you be?

Last week, I wrote about the opposite scenario.  Both the motorist and pedestrian were “zombies”, but the pedestrian clearly had the right of way.  In that case, the pedestrian shared the blame even though she was established within a crosswalk.  She was found 25% responsible for the collision because she wasn’t looking out for her own safety.

What about this scenario, where the motorist is the one who has the clear right of way?

Wouldn’t you know, a court would likely divide “fault” in this scenario as well.  A useful, and authoritative, description of the law can be found in the case of Ashe v. Werstiuk, 2004 BCCA 75, a decision of a three judge panel of our Court of Appeal.

What lessons can be taken from the law I have shared with you in my last three columns about pedestrian and motorist responsibilities?  Each of us, motorists and pedestrians, must pay attention to what is going on around us.  Also, please stop for pedestrians!