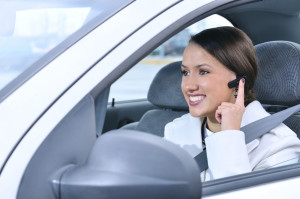 Not just a ban on handheld devices; an outright ban on the use of all portable electronic devices, even hands-free.

The call for an outright ban arose from yet another series of deaths and injuries arising from drivers distracted by cell phones.

The chairperson of the National Traffic Safety Board said the following:

“The data is clear; the time to act is now. How many more lives will be lost before we, as a society, change our attitudes about the deadliness of distractions?”

In British Columbia, hand held cell phone use was banned in January, 2010.  In my January 24, 2010, column, I quoted from a summary of research findings from the Office of the Superintendent of Motor Vehicles in this province:

“Evidence also concludes that there is no difference between the level of driver distraction associated with hands-free and hand-held cell phone use.”

I posed the rhetorical question of when will we take the other step forward and prohibit wireless chatting while driving altogether.

It’s not having only one hand on the steering wheel that causes crashes.  It’s being distracted by the conversation.  Interestingly, studies have shown that conversations between driver and passenger are not as distracting.

Banning hand-helds did nothing for us except stimulate the cell phone industry.  I wonder how many millions of dollars have been wasted on cell phone peripherals as a result of the hand-held ban.

Aside from the horrendous cost to British Columbians, I would argue that instead of making our roads safer, banning hand-helds actually made our roads less safe.

Cell phone use by drivers has more likely increased, rather than decreased.

We have seen what effective legislation can do to stop crashes and save lives.  The new impaired driving legislation in British Columbia has been brilliantly effective.

Have you seen the statistics?  There has been an astoundingly beautiful reduction in alcohol related crashes.  Yes, there is more work to be done, but it is a fabulous start.

Let’s heed the results of the research done by our own Superintendent of Motor Vehicles.  Let’s notice the calls to action in other parts of the world.

Let’s reduce crashes and save lives with another bold legislative move and ban the use of all portable electronic devices by drivers.

Until the political will builds to the point that effective legislation is finally passed, how about be proactive.  Use this time of resolutions to resolve to pop your cell phone into the trunk in 2012.

One crash is too many.