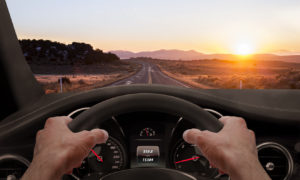 The driver was not looking down, dialing the phone or texting.

Witnesses say she was looking straight ahead out the windshield, talking on her cell phone.

She continued on at highway speed past four cars and a school bus that had come to a stop in the next lane, for the red light that she also faced.

A 12-year-old passenger in a vehicle she t-boned was killed.

How, looking straight ahead through the windshield, could she have failed to notice the red light? Road safety researchers call this a classic case of “inattention blindness.”

Each of us has experienced it.

How many times have you missed a turn-off?

You blew by that turn-off just like the lady blew through the red light. The only difference was that your inattention blindness didn’t kill anyone.

Did you shrug it off? No big deal, you just missed a turn-off?

Don’t fool yourself. This is dangerous driving behaviour.

That missed turn-off was the “tip of the iceberg” of things you failed to process in the roadway environment.

Had you not missed the turn-off, requiring you to turn around to get back on track, you would not have even clued in about your lack of road awareness.

As one study put it, your self awareness of how much of the roadway environment you were failing to process was “similar to the fictional cartoon character Mr. Magoo, who was blithely unaware of his driving impairments” (Let me know if you want a copy of the “Magoo study.” I was unable to provide a hyperlink).

There are all sorts of things that might occupy your conscious thoughts while you are driving, leading to varying levels of inattention blindness.

It takes actual effort to maintain constant, direct attention to the roadway ahead of you.

If you don’t, your mind will wander. As it wanders, you will miss processing things even though you are looking straight through the windshield.

I came up with a mechanism to keep my own mind from wandering while driving. I call it “doing the 10 and 2.” I use my hand positioning as an attentiveness alarm.

Current wisdom says that other positions are safer because of air bags, i.e. “8 and 4” or “9 and 3,” but it doesn’t matter what you choose.

If your hands wander to more comfortable places like resting at the bottom of the steering wheel or one elbow on an arm rest, that’s the attentiveness alarm going: “Your mind is wandering!”

Since implementing “the 10 and 2” for myself, I don’t have the “close calls” that I used to have.

Cell phone use while driving is a special kind of cause of inattentive blindness. That’s not dialing or texting. It’s simply talking on the phone, with your eyes looking out your windshield. It is estimated that drivers using cell phones look but fail to see up to 50 percent of the information in their driving environment (April, 2012 “White Paper” published by the National Safety Council (United States))

Most people, like Magoo, are blithely unaware of the 50 percent they are failing to process. They don’t have a clue about how dangerous they are being. They think “I’m capable of multi-tasking. I’m looking out the windshield. I’ve never caused a crash. I’m safe.”

Everyone thinks that texting is the problem.

Texting is definitely a problem, but quoting from the 2012 White Paper: “…in 2010, an estimated minimum of 160,000 crashes involved texting or emailing, versus 1.1 million crashes involving talking on cell phones.”

Why? Everyone knows that it’s dangerous driving behaviour to take your eyes off the road. That awareness leads to less texting and in less dangerous road conditions.

Those chatting away on their hands free cell phones are blithely unaware of the danger. They think that they’re looking through the windshield so it must be safe. This leads to much more frequent use of cell phones while driving and no precautions taken to limit the risk.

Please don’t be like Mr. Magoo. Stop talking on your cell phone while driving, hand held or hands free (there’s no difference in the level of distraction). And how about joining me in taking an active step forward in attentiveness by “doing the 10 and 2”?