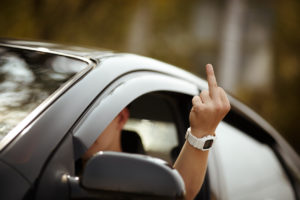 I struck a raw nerve with my last column about collision insurance.

A former client, continuing to feel symptoms from a rear-end collision that occurred years ago, inspired the topic.

She became pissed off by the bad driving attitude of a friend of hers who had just caused a collision.

Her friend’s focus was on how grateful she was for her insurance package, not on the injuries she might have caused to her innocent victims.

My former client puzzled: “It seems strange that our society is set up to make it easy on people to smash their cars into each other.” She came up with the idea of voiding collision insurance coverage for “at fault” drivers.

One reader, a self-described “ICBC insurance agent,” referred to this as “…absolutely atrocious thinking,” noting that

“The point of insurance is not to worry. That’s why you buy it.”

The insurance agent’s pitch relied on the foundation that we all drive poorly from time to time: “Sure, it’s awful that people don’t pay attention and we’ve ALL done it. Don’t lie to me. Each and every single one of you….we’ve all done something dumb on the roads. If you feel like you are exempt from the above you are an absolute liar…”

In the view of the insurance agent, the consequences of that poor driving is really just a matter of luck:

“I’ve never caused an accident but if I do, I shouldn’t be thousands out of pocket. That’s an absolutely disgusting thought.”

I have done a lot of thinking, and writing, about road safety. In my view, this ICBC insurance agent has “hit the nail squarely on the head” in identifying the problem with our driving attitudes.

I am not a religious guy, but quoting from a biblical excerpt, I am certainly not “He that is without sin…” such that I might “first cast a stone” at anyone.

I can identify, squarely, with the insurance agent’s views because I used to share them.

Luck was on my side at times when I had momentary lapses in attentiveness, failed to “drive the conditions,” came close to nodding off to sleep during a long drive, and at times of other common driving behaviours that regularly occur without a crash because luck is on our side.

A particularly tragic crash, not caused by me, triggered a positive change in my driving attitude, and behaviour.

On March 20, 2012, a 56 year old motorcyclist was killed, his wife permanently injured, when the motorcycle was rear-ended while sitting at a complete stop at a Kelowna intersection.

I noted the obvious in my March 29, 2012, column: “The 56 year old would still be alive today if the SUV driver had simply been paying attention”. It was one of those “bad luck” situations when the momentary lack of attentiveness resulted in horrific consequences.

I also proposed a tool to help us maintain our driving focus, a tool that I committed to trying myself.

In a follow-up column October 24, 2013, a year and a half later, I was pleased to report that the tool had been tremendously successful. The periodic “close calls” that I had previously experienced throughout my driving life had completely disappeared.

It’s an easy tool: Simply commit to keeping your hands at particular spots on the steering wheel.

I use “ten and two”. Because of air bags it is perhaps better to use “nine and three” or even “eight and four”. I am no expert on ideal hand positioning. The point is the commitment, not the particular position.

I found that any time my focus left the road, I likewise lost focus of my hold on the steering wheel. It’s not comfortable maintaining a constant hand position, so it requires constant effort to do so.

Immediately on my hands relaxing to something more comfortable, perhaps slipping down the steering wheel or laying in my lap, that was the reminder to refocus my attention on the road.

I continue to “do the ten and two”. It is just as effective today as it was five years ago when I started. I am continuing to “create my own luck” around bad driving attitudes, and you can too.