This is my second of a series, describing scenarios where a motorist and cyclist were each found legally responsible for a collision. 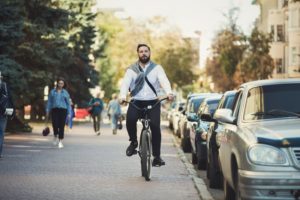 In each scenario, the collision could have been completely avoided had either the motorist, or the cyclist, taken reasonable care.

With a modest jacking up of care behind the wheel, and behind the handlebars, we can eliminate these collisions. Please consider your own driving (and riding) behaviours  as you read about the scenarios. And please adjust.

But he was not riding recklessly. Rather, he was riding an estimated 8 kms/hour as he rode across an entrance to a gas station.

The motorist was leaving the gas station. Quoting from the Court of Appeal decision of Bradley v. Bath, 2010 BCCA 10, “He testified that he stopped his vehicle before crossing the sidewalk, looked to his right and did not see anyone on the sidewalk and looked to his left for at least five seconds until the traffic coming from the east had cleared. He then proceeded onto the sidewalk…”

The trial judge found the motorist 100% at fault: “The judge held that, in the five-second period described by the defendant in the second scenario between the time he looked to the right and the time he proceeded across the sidewalk, a pedestrian, jogger or rollerblader could have travelled the distance from a point outside of the defendant’s line of sight to the point in front of the defendant’s vehicle. The judge concluded that, under this scenario, the accident would not have been caused by the plaintiff riding his bicycle on the sidewalk but, rather, it would have been caused by the failure of the defendant to look to his right before moving his vehicle forward after looking away for a period of time during which a person could have appeared to the right of his vehicle.”

Are you aware of your responsibilities as a motorist, when crossing a sidewalk?  Here is section 176(1) of the Motor Vehicle Act requires:

Effectively, sidewalks are stop signs. You must stop ahead of them and then you must yield to pedestrian traffic.

ICBC appealed. The Court of Appeal decided that the cyclist should share fault.

The crux of the matter was described by the Court of Appeal as follows:  “The proper question was not whether a jogger, rollerblader or pedestrian could have been hit by the defendant’s vehicle. The correct inquiry was to determine whether the plaintiff failed to take reasonable care for his own safety and whether his failure to do so was one of the causes of the accident.”

The end result was an equal sharing of liability between the motorist and the cyclist.

Would the result have been different had it been a rollerblader, jogger, or parent pushing a baby buggy who had been struck?

Not breaking the law, they would not have faced a “heightened duty”. But of course it would still have been prudent to catch the eye of the motorist before moving in front of the vehicle, or to wait for the motorist to proceed.

What lessons can we learn from this scenario?

Lessons for Motorists:  Sidewalks are like stop signs. Stop, look for, and yield to sidewalk users. And please pay attention to changing circumstances around your vehicle when watching for a gap in traffic.

Lessons for sidewalk users: If you have your bum on the seat of a bicycle, the law imposes a heightened duty of care. Regardless, you cannot assume that motorists will notice you. Before moving in front of a vehicle, catch the motorist’s eye and get their recognition that you’re there.