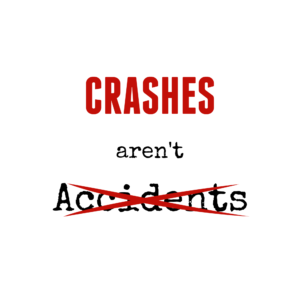 Why should “Accident” (referring to road traffic incidents) go the way of other words like negro, midget and retarded?

Because it carries heavy baggage of unaccountability.

History lesson:  In the early 1900s, when companies were looking to protect themselves from the costs of caring for workers injured on the job, “Relentless safety campaigns started calling these events ‘accidents,’ which excused the employer of responsibility.” (Matt Richtel, New York Times) May 22, 2016, quoting history professor Dr. Peter
Norton.

Matt goes on sharing Dr. Norton’s history lesson: “When traffic deaths spiked in the 1920s, a consortium of auto-industry interests, including insurers, borrowed the word to shift the focus away from the cars themselves.”

The word stuck, it’s connotation of unaccountable inevitability getting in the way of taking important steps to fix an ongoing, and growing, road safety disaster.

Overly dramatic?  There is an average of over 175 collisions resulting in casualties every day in British Columbia. And crashes resulting in at least one fatality occur an average of every one and one-third days (2016 statistics). The numbers are growing.

Road safety advocates have been campaigning against the “A” word for years. Here are some quotes I’ve found online:

“When you use the word ‘accident’, it’s like ‘God made it happen” (Mark Rosekind, head of the National Highway Traffic Safety Administration);

“The word wrongly implies that human decisions and actions have nothing to do with it” (Jeff Larason, former Boston traffic reporter, now director of highway safety for Massachusetts);

“The phrase ‘it was just an accident’ serves both as a claim of innocence and as an exoneration.” (RoadPeace);

“When we say ‘accident,’ we are basically throwing up our hands and saying that the deaths of children like Allison are inevitable, something no one is responsible for, like bad weather…” (His-Pei Liao).

There is a web site dedicated to this issue: Drop the ‘A’ Word, which has a compelling introduction:

A national (United States) campaign to eliminate the “A” word was kicked off June 8, 1997.  I cannot possibly articulate the issue better than the road safety giants who carefully crafted the proclamation:

Whereas, changing the way we think about events and the words we use will affect the way we behave. Our goal is to eliminate the word “accident” from the realm of unintentional injury, on the highway and across the nation;

Whereas, motor vehicle crashes and injuries are predictable, preventable events. Continued use of the word “accident” promotes the concept that these events are outside of human influence or control. In fact, they are predictable results of specific actions;

Whereas, we can identify their causes and take action to avoid them. These are not “acts of God”, but predictable results of the laws of physics;

Whereas, use of the word “accident” works against bringing the appropriate resources to bear on this enormous problem. It allows the idea that the resulting injuries are an unexpected part of life;

Now, therefore, we the undersigned, in recognition of this life saving and injury preventing opportunity, do hereby proclaim a national campaign:

To eliminate the word “accident” from the realm of unintentional injury, on the highway and across the nation, with our partners, with the media, and in all public contexts.

My column last week included a teaser, that I would share the results of an on camera debate about this issue with local journalist, Kent Molgat. He was very kind and would have granted me the win regardless of my performance. Unfortunately, you won’t be able to see the debate because an example I used for how the “A” word would not fit all unintentional occurrences (a sniper target shooting on a crowded beach, “accidentally” blowing off a child’s head) failed to meet publication standards!

How about we come on board to eliminate the “A” word when referring to motor vehicle collisions, crashes, and incidents in Kelowna?  Will the local news media sign on?  Will you?