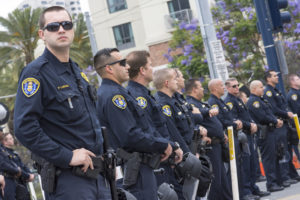 Heck of a hunch!

You’re staking out a residence as part of a drug trafficking investigation. You see a Mercedes-Benz SUV, and pull it over for a traffic violation.

The passenger is vigorously rubbing his hands together and reaching into the glove box. On approaching the vehicle, you notice a small glob of lotion on the passenger’s chin.

You’ve got a hunch. Some traffickers hide baggies of drugs in their rectum. How do they get the baggies in there?  Lotion!

You arrest him and have him placed in a cell with the water turned off so that he can’t dispose of the suspected drugs down the toilet.

At the bail hearing the next morning, the defence lawyer is described as “anxious to proceed”, but the hearing is delayed to the afternoon.

The delay is just enough for nature to overpower the accused’s constriction of his sphincter.

The baggies contained heroin, crack-cocaine and fentanyl. Your hunch was right. What an incredible piece of police work!

Unfortunately (or fortunately, depending on how you look at it), a hunch isn’t enough to arrest and jail someone in Canada.

We made that call when we entrenched the Canadian Charter of Rights and Freedoms into our constitution back in 1982. The Charter outlines a basic set of civil and political rights and freedoms.

Those rights protect us from the policies and actions of government. The enforcement arm of government, of course, is the police.

We tasked the courts with protecting our rights. It wasn’t a job judges asked for. We forced it on them. We gave them powerful legal tools, including the ability to “strike down” laws that infringe on our rights.

One shining example is the change in the law allowing assisted suicide.

When it comes protecting our rights and freedoms in relation to police, judges have limited tools to work with.

We didn’t give them an independent “judicial policing force” to follow police officers around, ensuring they respect our rights.

One of the few tools they have is to prevent a prosecutor from relying on illegally obtained evidence (evidence obtained through a breach of a citizen’s rights).

The tool is not used lightly. When it is, though, it seems like a travesty of justice. In this case, the judge disallowed the use of the 53 baggies of drugs, resulting in the acquittal of a clearly guilty drug trafficker.

Imagine the frustration of the police when that happens.

In the words of one judge of the Supreme Court of Canada:

“Frustrating and aggravating as it may seem, the police as respected and admired agents of our country, must respect the Charter rights of all individuals, even those who appear to be the least worthy of respect.”

I trust, though, that police forces in Canada will learn of this decision. The hopeful result will be that each of us will be at even less risk of being arrested and thrown in jail on a hunch, however well meaning the police officer.

See the original report: “Drugs up butt does pay off“