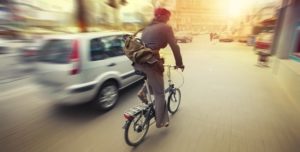 Two collision scenarios arise when cyclists overtake motorists. The most common is the right turning motorist, clueless about the overtaking cyclist.

We don’t blindly move between vehicle lanes without checking our mirrors and shoulder checking. Why don’t we, as a matter of course, do the same thing before moving across the area of the road commonly occupied by cyclists?

But the law favours motorists. Even in the case of designated bicycle lanes.

And did you know that a cyclist is actually prohibited from overtaking a vehicle unless the cyclist is within their own lane (bicycle lane or otherwise)?

Section 158 of the Motor Vehicle Act, contains a general prohibition against passing on the right unless you are within your own lane.

Section 183, which imposes cyclists with “the same rights and duties as a driver of a vehicle”, applies that prohibition to them.

Does that sound nonsensical?  Imagine cycling along a highway, on a wide shoulder. Congested traffic slows and then stops. The law technically prohibits you from continuing along, cycling past the stopped traffic.

Our Court of Appeal in Ormiston v. ICBC, 2014 BCCA 276, discusses that issue. A van had come to an unexplained stop on a roadway, leaving about three feet between the passenger side of the van and the fog line. A 16 year old cyclist came up behind the stopped van and proceeded to pass along the shoulder of the road. The van abruptly moved to the shoulder, forcing the cyclist to swerve off the roadway to avoid a collision. The cyclist was found 100% at fault for his own injuries.

The court’s analysis with regard to the prohibition of a cyclist passing on the right: “While I doubt the legislative intention was to create by this somewhat convoluted statutory route what would be thousands of miles of unmarked and ill-defined bicycle lanes across the province, I do not consider s. 158 (1)(b) constitutes an applicable exception to the prohibition against passing on the right in any event. As defined, the exception applies to a laned roadway being a roadway divided into marked lanes for vehicles travelling in the same direction. The markings divide the roadway; the lanes marked are on the roadway. A roadway does not include the shoulder. The shoulder could not be an unobstructed lane on a laned roadway. The “laned roadway” exception has, as the judge said, no application here. It does not permit cyclists to pass vehicles on the right by riding on the shoulder.”

Even if you are within a dedicated lane, permitted to pass on the right, section 158(2)(a) puts an onus on you to ensure that overtaking the slowed or stopped traffic can be done safely.

An example of section 158(2)(a) in action is the case of Nelson v. Lafarge Canada Inc., 2013 BCSC 1552. The cyclist, described as riding “hard and fast”, had been riding alongside a cement truck as they both approached a green light at a Vancouver intersection.

The cyclist was in his own lane, the curb lane. He was seriously injured when he was struck by the front grill of the cement truck as it turned right.

The two had been approaching the intersection side by side, but as the truck slowed in preparation for making the right turn, the cyclist was overtaking the truck, bringing section 158(2)(a) into applicability.

The trial judge found the truck driver ought to have kept a more vigilant lookout, so as to notice the cyclist. And also that as a commercial truck driver he was “…obliged to exercise great caution when approaching, preparing for and executing a right turn on a green light at the intersection…”.

But the cyclist was assessed 65% at fault. The words of the trial judge: “In balancing blameworthiness, I find Mr. Nelson’s conduct constituted a significant departure from the requisite standard of care which created a risk of serious harm. He was aware of the Truck travelling eastbound on his left but focused only on his own path forward and did not check for an activated right turn signal, which was there to be seen. Instead, he tried to pass the Truck on the right without first determining whether such a movement could be made safely. In my view, such conduct was very careless.”

What lessons can be learned from these scenarios?

Lessons for cyclists:  As glorious as it is to overtake vehicle traffic, a clueless motorist might turn into you, or directly across your path. And as unfair as it might seem, the law is against you even when within a designated bicycle lane.

Lessons for motorists:  These collisions would be eliminated if motorists simply kept a vigilant look-out for the vulnerable cyclists we share the roads with. Every time you move to your right, check your mirrors and shoulder check, expecting that a cyclist might be there.