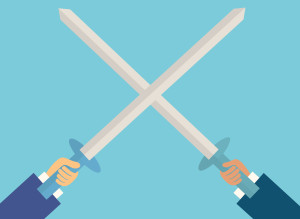 Two movie scenes came to mind as I read the carefully considered reasons for judgment of Mr. Justice Gordon Weatherill in Wallman v. John Doe, ICBC and others, a decision released last week after a 7 week trial.

One scene that came to mind was Prince Humperdinck analysing the site of the magnificent duel between fencing master Inigo Montoya and the hero, former farm hand Westley, in The Princess Bride.  Prince Humperdinck marvels as he pieces together the duel from the scuff marks in the dirt.  I felt a bit like Humperdinck as I read the judgment, marvelling about the magnificent duel between plaintiff lawyers, Scott Stanley and Kevin Gourley, and the legal teams of the defending insurance company, ICBC.

The other, as I neared the end of the judgment and saw that justice was so well served, was the scene in Braveheart when Mel Gibson bellows out “freedom” with the kind of raw emotion that makes the hair on the back of your neck stand up.

On the one hand, the plaintiff legal team held “all the cards”.  The injured plaintiff was an extremely credible and highly regarded emergency room physician whose life fell apart because of classic brain injury symptoms that came on after the collision.  Witness after witness came forward to describe the difference between the plaintiff before the collision and the plaintiff since.  Specialist after specialist came to express their opinions that the change arose from a brain injury that must have occurred during the collision.

On the other hand, ICBC had an ace in the hole that would make any plaintiff lawyer fear that justice could be snatched away by smoke and mirrors.

I wonder, if ICBC had succeeded in having the case heard by a jury, if the jurors would have seen through the smoke and mirrors as well as Mr. Justice Weatherill did.

See, this was one of the multitude of collisions that, if it even made the news at all, would have been reported as a minor collision resulting in no injuries.  Even the victim, a medically trained emergency room physician, didn’t realize at the scene that he had suffered a significant injury, if any injury at all.

The Defence made much of the lack of any damage to the bicycle rack on the front of the bus and the fact that it cost only $673.10 to repair the cosmetic damage to the rear bumper of the Honda Accord the bus slid into.  They called two engineers to give opinions that the Accord would have been bumped forward at less than 5 kms/hour, and a biomechanical engineer to say that the forces in the collision “were less than those that scientific studies to date have shown are likely to result in a concussive injury.”

I’ve written before about the smoke and mirrors that statistics can represent.  Of course, a brain injury is unlikely to occur in a low speed, rear end collision.  You don’t need an expensive biomechanical engineer to quote scientific studies in order to convince any reasonable thinking person to come to that conclusion.  The relevant fact is what that same biomechanical engineer had to agree to in cross examination, which was that he could not “rule out or exclude the possibility that a concussion injury will occur”.

Consider a gambler who bets his house that black won’t come up 10 times in a row in successive spins of the roulette wheel.  After the 10th spin in a row comes up black, how relevant is it that it had been unlikely to occur?  Would it be fair for the gambler to try to avoid making good on his bet by bringing a highly paid mathematician to explain how unlikely it was?  All that matters is that it was possible, and it really did occur.

It was ICBC’s classic “Low Velocity Impact” defence.  It’s a defence that unfortunately does work sometimes, particularly with jurors who are more susceptible to being presented with photographs showing little or no damage to bumpers and being asked to decide, essentially on the basis of those photographs, that an injury did not occur.

Mr. Justice Weatherill assessed Dr. Wallman’s losses arising from the collision at over five million dollars, and granted judgment in that amount.

Maybe this case will help us all, including members of the medical profession, other judges and jurors, understand the reality that serious, life long, injuries can occur in collisions that appear to be so very minor.  Maybe if we all “get it”, that understanding might translate into much, much greater care as we get behind the wheel.