When should you get legal advice about a slip and fall injury? Before it happens. 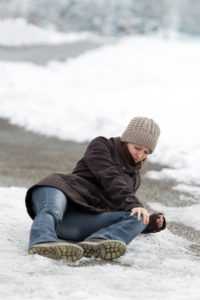 Because the next day, or even an hour after the fall, is too late.

A starting point: merely showing that you slipped and fell is not enough to establish a legal claim.

Not even if you prove that you were sober, wearing reasonable footwear and walking in a reasonable manner.

And that the surface you fell on was incredibly slippery.

The law does not require property owners to keep walking surfaces 100% safe, 100% of the time. It requires only that “reasonably care” be taken to keep premises “reasonably safe” (I’ll refer to that as the “legal duty of care”).

Dangerously slippery surfaces can, and do, arise even with reasonable care taken to prevent them.

And complicating matters is the fact that people sometimes slip, trip and fall on reasonably safe surfaces.

An example of where the law was applied is a case called Hanes v. Loblaws Inc., 2017 BCSC 102. The injured Plaintiff had slipped and fallen in a Superstore. She had returned a box of oranges to the customer service desk. She slipped and fell when she turned to get a replacement box.

A number of Superstore employees were called as witnesses. They described impressive (to me) efforts to keep the slushy wetness of the mid-December day from getting into the store, including periodic mopping and wet-vacuuming the matting as it became saturated.

The judge found that the efforts to keep the floor as clean and dry as possible in the circumstances were reasonable.

Regardless of those efforts, the Plaintiff had not even proven that the area of the floor where she fell had been wet. The only evidence of that was the Plaintiff’s assumption that moisture she felt on the back of her jacket (which was not long enough to cover her buttocks) was caused by water on the floor. That evidence was not corroborated.

Noting he was speculating, because the exact cause of her fall had not been proven, the judge inferred that the Plaintiff’s leather soled shoes with approximately two inch heels had likely been wet when she entered the store, and it would have been easy to skid a little, causing her to fall, given that wet footwear alone.

The case was dismissed.

How might things have been different had the Plaintiff known the law before that day?

One, she might not have assumed that the floor would be dry, and that drying her shoe bottoms as she entered the store would be enough care for her own safety. If so, she might have taken a higher level of care for her own safety, assuming with every step that it might be in a pool of water. That might have prevented the fall from occurring in the first place. I’ve often shared my view that “the best claim is no claim at all”.

Two, she might have had the presence of mind (as she lay there on the floor) to look around herself and see why she fell. If there had been a small pool of water, she could have made note of it, called over a witness to verify it, and used her phone to take photos and short video snippet of it, thereby “preserving the evidence.”

Three, she might have taken a look at the bottom of her shoes and preserved the evidence of their status. Perhaps one sole (the one that slipped) was wet and the other was dry, proving that she slipped because of a wet floor and not wet shoes.

Four, she might have looked around for other wet areas, and “preserved the evidence” of those as well, which would have supported an argument that the impressive sounding safety procedures had not been followed or not been sufficient to keep the area reasonably safe.

It is absolutely critical to “preserve the evidence” of the scene of a slip and fall, and of what occurred. Bunches of photographs, as well as video, should be taken at the scene as immediately as possible. Witness names and numbers should be taken. And you should “journal,” as soon as possible, absolutely everything you can remember with as much detail as possible (because memories inevitably fade over time).

And the first business day after the fall, get legal advice particular to your situation. It might well not be a pursuable claim, but if it is, there might be more steps that can be taken to help achieve justice.